“Amber Sullins gets a minute or two to tell up to two million people about some extremely complicated science, using the tools of her trade: a pleasant voice, a green screen, and small icons denoting sun, clouds, rain, and wind. She is the chief meteorologist at ABC15 News in Phoenix, so her forecasts mostly call for sunshine.

Within this brief window, however, Sullins sometimes manages to go beyond the next five days. Far beyond.
“We know climate change could affect everything about the way we live in the future, from agriculture and tourism to productivity and local business,” she once noted. “But at what cost?”

Denialism is “an American phenomenon,” says veteran Miami weatherman John Morales, who is now at NBC 6. “This is not something you see around the world.”
There are about 500 broadcasters like Sullins and Morales, who each receive regular data dumps and ready-to-use graphics from Climate Matters, an organization whose mission is to turn TV meteorologists into local climate educators. The program was founded in 2010 by Climate Central, a research-and-journalism nonprofit, with help from George Mason University, the American Meteorological Society, and others.

Newscasters who participate are sent possible topics for climate-related segments every week, with TV-ready data and graphics pegged to large-scale meteorological events, such as unusually high heat or precipitation, local trends, or seasonal themes.
“Well, Santa’s elves are dealing with a little bit of a heat wave now at the North Pole,” Sullins told viewers on Dec. 22, following an outline provided by Climate Matters. “It’s 50 degrees above average up there.” She showed an on-screen graphic with cartoons showing Santa Claus in increasing states of thermal distress. At the bottom of the graphics appear a Climate Central logo and the source of the scientific data—in this case, temperature records and projections from NASA, the National Oceanic and Atmospheric Administration (NOAA), and a European atmospheric-science consortium. 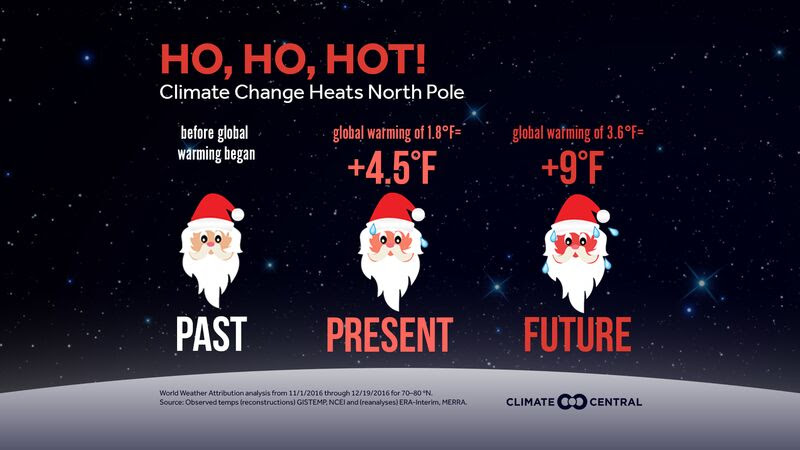