Nationally prominent climate change skeptic Dr. John Christy believes his office floor at the University of Alabama in Huntsville was “targeted” by gunshots over the national March for Science weekend.

“To me, it looks like the fourth floor was targeted,” Christy said Tuesday. The pattern of the damage “does raise the possibility it was a little more than a coincidence,” he said.

However, UAH police think the shooting was a “random, isolated” act. They found cartridge casings beside Sparkman Drive in front of Cramer Hall, where Christy’s office is on the fourth floor. Bushes and trees between the hall and the street make it likely someone wanting to shoot from the street into the building would aim at the top two floors, they said. 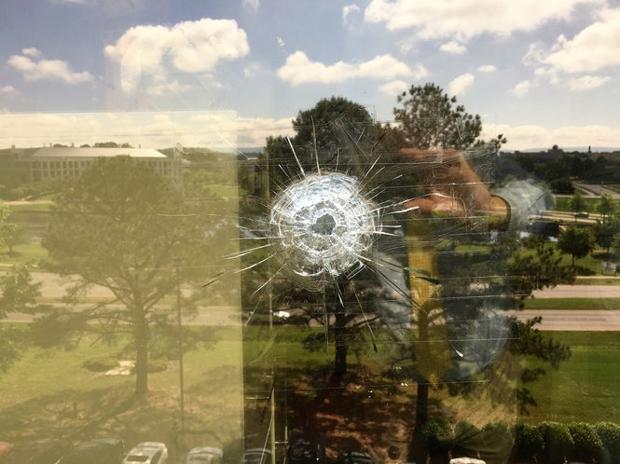 A high-velocity cartridge made this hole in double-pane glass in an office near that one occupied by Huntsville climate change skeptic Dr. John Christy over the Earth Day and March For Science weekend. Seven shots in all were fired at the building, and Christy believes his floor was targeted. (Lee Roop/[email protected])

“UAH police are investigating an incident where seven bullets struck Cramer Hall on the university’s campus while the building was unoccupied sometime between Friday night and Monday morning,” the university said in a statement today. “Investigators believe the incident to be a random, isolated event unlikely to be a premeditated act. Anyone with any information about this crime is encouraged to email the UAH Police at [email protected].”

The university police say they found no relevant images from campus security cameras or the cameras at a nearby defense contractor. They have marked the case “inactive” pending new information.

Cramer Hall is a complex of two large buildings connected by a glass connector. A total of seven bullet marks were visible in the sides of both buildings and the glass connector Tuesday. One went through a window in the office next to Christy’s. 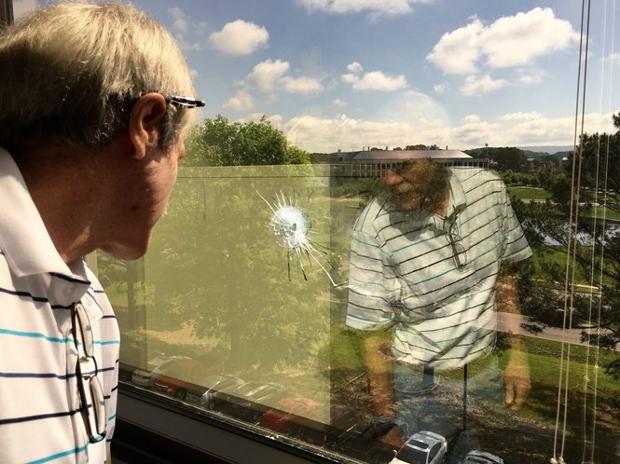 University of Alabama in Huntsville climate scientist Dr. John Christy looks at a bullet hole in the window of the office next to his at the university. Seven shots were fired at the building over the weekend of April 22-23, and Christy believes his floor was targeted. (Lee Roop/[email protected])

Christy’s colleague and fellow climate change skeptic Dr. Roy Spencer, whose office is also in the building, posted to his blog about the shooting.

“Given that this was Earth Day weekend, with a March for Science passing right past our building on Saturday afternoon, I think this is more than coincidence,” Spencer wrote.

“When some people cannot argue facts, they resort to violence to get their way,” Spencer wrote. “It doesn’t matter that we don’t ‘deny global warming’; the fact we disagree with its seriousness and the level of human involvement in warming is enough to send some radicals into a tizzy.”

Spencer said all of the bullets hit the fourth floor, but UAH Chief of Staff Ray Garner said some shots hit the third floor. Garner also the science march did not pass Cramer Hall, but started farther south at Shelbie King Hall.

Police say they found seven 5.8 x 28 mm cartridge casings beside Sparkman Drive after being called to the scene Monday morning by a colleague with the office next to Christy’s. She found a large hole in her double-pane window and broken glass on the floor when she arrived for work. Police recovered bullet fragments inside the office.

The 5.8 x 28 mm cartridge is a small, high-velocity round used in military and police weapons around the world.

While asset owners may pursue a social purpose or “sacrifice some performance on their investments to achieve an ESG goal,”25 investment managers entrusted to...
Read more

Just how crazy are these people?