Vatican Odd Couple: Popes Francis & Benedict ‘in complete disagreement…never talk to one another’

Bombshell from Vatican: Benedict and Francis “in complete disagreement”, “never talk to one another”

(ROME) – Speaking at a March 16th conference in Limburg, Germany, the long-time Vatican correspondent Andreas Englisch has delivered an explosive allegation: In contradiction of public appearances, Pope Francis and Pope Emeritus Benedict XVI “are in complete disagreement” and “never speak to one another.” The Pope Emeritus has apparently stated that he only appears in public “at the explicit request of Pope Francis.” What is shown on these occasions, Englisch continues, is “only the pretense of friendship.” 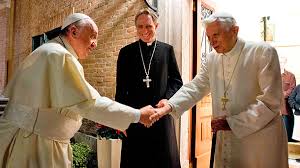 No official transcript of the press conference is yet available, but Giuseppe Nardi, another well-known Vaticanist who was in attendance, says that Englisch continued his statements by describing Pope Francis as a “strong personality” who “gets what he wants,” and that he has little in common with Pope Emeritus Benedict XVI but “uses him when necessary for the optics.” Englisch concluded his dramatic remarks with a remarkable statement: that, in addition to the pressure put upon the Pope Emeritus to resign, “different ecclesiastical forces” are putting pressure on Ratzinger in a different direction: “to return.”

Translated from the German with the aid of Google Translate.

For the full text of Nardi’s report, reprinted from katholisches.info, click here.

Update: VATICAN HEAVIES SILENCE ‘CLIMATE HERETICS’ AT UN PAPAL SUMMIT IN ROME – Vatican to skeptic asking question at conference: ‘You have to control yourself or you will be escorted out of here.’

Climate Depot’s Morano: ‘The Vatican is essentially going to confuse Catholics into thinking that their positions on man-made global warming fears are now an article of faith — are now part of Catholic doctrine…This is nothing short of an ‘Unholy Alliance’ between the Vatican and the man-made climate fear promoters.’

Retired NASA Scientist Hal Doiron, a member of the team that developed the Apollo Lunar Module landing software: ‘I am here to report today: Houston we do not have a problem. It is impossible to think global warming will cause any problem especially when you look at the benefits of adding CO2 to the atmosphere.’

Meteorology Instructor at the U. of Colorado Dr. Richard Keen:  On UN Climate ‘solutions’: ‘It’s like using surgery to solve a sniffles. It’s bad on two counts. The cure is worse than the ailment and number two, the cure does not even fix the ailment. So why bother? All of these draconian policies that would increase world poverty would be flawed policies that would fail to solve a non-existent problem.’

Former Thatcher advisor Christopher Monckton: ‘It is not the business of the Pope to stray from the field of faith and morals and wander in to the playground that is science. Do not invite only one narrow and boisterous scientific viewpoint that has been repeatedly discredited as events and the science and the data have unfolded.’

Ban on anesthesia next?! Doc suggests ‘lowering the flow of anesthetic gas’ in patients to save planet – 1 hour of surgical anesthesia equivalent...

...would you go to a cancer treatment center that was worried about its carbon footprint? The post Ban on anesthesia next?! Doc suggests ‘lowering the...
Read more