Statistician: UN climate treaty will cost $100 trillion – To Have No Impact – Postpone warming by less than four years by 2100

Danish statistician Dr. Bjorn Lomborg, the President of the Copenhagen Consensus Center, has come out denouncing the UN climate Paris agreement as a massive waste of money that will do nothing to impact climate change. In a January 16, 2017 Prager U video titled, “The Paris Climate Agreement Won’t Change the Climate,” Lomborg explains that “the agreement will cost a fortune, but do little to reduce global warming.” (Full transcript here) 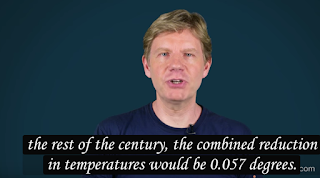 ‘Exactly how much will this treaty reduce global temperatures?’
‘The UN agreement will cost a fortune, but do little to reduce global warming.’

“Using the same prediction model that the UN uses, I found that [Obama’s] power plan will accomplish almost nothing. Even if its cuts to carbon dioxide emissions are fully implemented – not just for the 14 years that the Paris agreement lasts, but for the rest of the century — the EPA’s Clean Power Plan would reduce the temperature increase in 2100 by just -.023 degrees Fahrenheit,” Lomborg explained.

“In the unlikely event that all of these extra cuts also happen, and are adhered to throughout the rest of the century, the combined reduction in temperatures would be 0.057 degrees. To put it another way, if the U.S. delivers for the whole century on the President Obama’s very ambitious rhetoric, it would postpone global warming by about eight months at the end of the century,” Lomborg said.

Lomborg continued, aiming his analysis at the much touted UN paris climate agreement.

“Now, let’s add in the rest of the world’s Paris promises. If we generously assume that the promised carbon cuts for 2030 are not only met — which itself would be a UN first — but sustained throughout the rest of the century, temperatures in 2100 would drop 0.3 degrees — the equivalent of postponing warming by less than four years. Again, that is using the UN’s own climate prediction model,” Lomborg said.

He continued: “But here is the biggest problem: These miniscule benefits do not come free — quite the contrary. The cost of the UN Paris climate pact is likely to run 1 to 2 trillion dollars every year, based on estimates produced by the Stanford Energy Modeling Forum and the Asia Modeling Exercise. In other words, we will spend at least one hundred trillion dollars in order to reduce the temperature by the end of the century by a grand total of three tenths of one degree.”

Lomborg rejected optimistic claims that the UN agreement would have any chance of a bigger impact on emissions not that to believe otherwise “requires mental gymnastics and heroic assumptions.” Those who claim the UN Paris agreement will have a big impact are basing their “assumptions that even stronger climate policies will be adopted in the future.”

But Lomborg counters: “Actually 98% of the assumed reductions will come only after 2030, which is what the current Paris agreement covers.”

“The actually promised emission reductions under the Paris agreement literally gets us just 1 percent of the way to the 2 degrees target,” he noted, adding “99% of what would be required is put off until after 2030.”

Lomborg praised fracking. “The U.S. already shows the way with its pursuit of fracking, making it safer and more efficient every year, America has drastically reduced the cost of natural gas. This momentous switch from coal to lower-CO2 gas as a source of energy has done far more to drive down carbon dioxide emissions than any recent government climate policy.”

He concluded by noting: “Turns out that those politicians who gathered in Paris, France, could learn a lot from Paris, Texas.” (Full transcript here)

Marlo Lewis: Why The Senate Should Help Trump Repudiate The Paris Climate Agreement

NY Mag: ‘The Climate Summit of Money’ at the UN – ‘It will cost sixteen & a half trillion dollars for world to meet its collective Paris goals)

Bjorn Lomborg: Trump’s climate plan might not be so bad after all – Clexit ‘will will stop the pursuit of an expensive dead end’

Facebook
Twitter
WhatsApp
VK
Digg
Previous articleGeologist: ‘The delusional war on warmth’
Next articlePruitt will put EPA back on track