According to Bill Nye, floods in California have never happened before, and must be due to global warming.

Of course, it is not that long since we were told that California was in a permanent state of drought!

Most of California’s rain tends to come during winter months, and thus determines whether the state has droughts or floods.

History tells us that California rarely has a “normal” winter. Many years are either unusually dry or wet.

And before anybody tries to claim that the current storm is unprecedented, they should first acquaint themselves with the Great Flood of 1862: 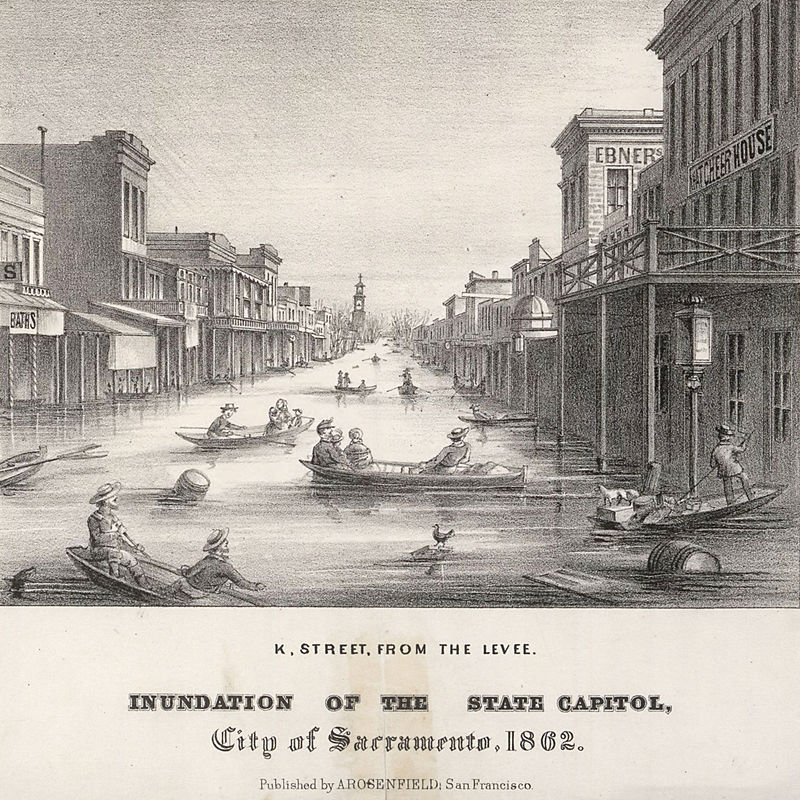 The Great Flood of 1862 was the largest flood in the recorded history of Oregon, Nevada, and California, occurring from December 1861 to January 1862. It was preceded by weeks of continuous rains and snows in the very high elevations that began in Oregon in November 1861 and continued into January 1862. This was followed by a record amount of rain from January 9–12, and contributed to a flood that extended from the Columbia River southward in western Oregon, and through California to San Diego, and extended as far inland as Idaho in the Washington Territory, Nevada and Utah in the Utah Territory, and Arizona in the western New Mexico Territory. Immense snowfalls in the mountains of the far western United States caused more flooding in Idaho, Arizona, New Mexico, and Sonora, Mexico the following spring and summer as the snow melted.

The event was capped by a warm intense storm that melted the high snow load. The resulting snow-melt flooded valleys, inundated or swept away towns, mills, dams, flumes, houses, fences, and domestic animals, and ruined fields.