Jeb Bush: Scott Pruitt is ready to turn around the EPA

(CNN)When Scott Pruitt and I assembled a Restoring Federalism Task Force last year, he headlined the plan: “Putting Washington In Its Place.” Those five words sum up exactly what the American people were clamoring for in this election: a dramatic shift of power out of a broken Washington and back into the hands of the people. 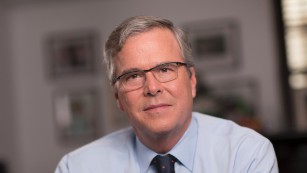 Jeb Bush
I cannot think of a person more suited to lead the Environmental Protection Agency than Oklahoma Attorney General Scott Pruitt, someone who understands how to rein in an out-of-control bureaucracy and ensure that Washington focuses solely on its core functions.
Pruitt and I share a common vision for empowering the states and limiting the intrusion of the federal government in every area of our lives. He understands that a government closest to the people is best able to serve their interests.
Our country has been held back over the past eight years because the appropriate balance between federal and state powers has become totally skewed. Individual liberty and our constitutional order have been threatened. People’s aspirations have been capped by a federal government that overextended its reach, and in no place has this been more apparent than at the EPA. The EPA has become a one-agency job killer, putting working people out of a job and increasing costs for everyone.
The far left has tried to distort Pruitt’s views in a lame attempt to make him into an anti-science boogeyman. The Scott Pruitt I know is far from it. Unlike liberals who want to shut down any rational debate about climate change, Pruitt has acknowledged human impact on the climate and supports a robust discussion about its effects and what the government should and shouldn’t do to address it.
In a 2013 speech, Pruitt demonstrated that he understood the proper role of the EPA, completely repudiating Democrats’ ludicrous claims about how he would lead the agency:
“May I say this to you and please hear my heart on this. … It’s not good for us to say that the EPA doesn’t have any role. Because just think about it, you have a power plant in Arkansas that’s burning coal irresponsibly or inconsistent with the statue, and it comes over to Oklahoma and Texas. So there is a role for the EPA, it’s just that they assert themselves in ways that are above that role.”
At the EPA, Pruitt will balance the importance of protecting our environment — ensuring clean air and water and being good stewards of our natural resources — with maximizing the ability of free people to innovate and create without interference from the federal government.
Facebook
Twitter
WhatsApp
VK
Digg
Previous articleReversing Obama’s 11th hour drilling ban
Next articleAlaska Considers Blocking Obama’s Drilling Ban