Climate records from ice cores indicate that abrupt, global-scale warming events with amplitudes of up to 10°C (in the Greenland region) were reached within as little as 50 years dozens of times during the roughly 100,000 years between the last interglacial (~120,000 years ago) and the current interglacial period (11,700 years ago to present).  That’s equivalent to a rate of up to 2.0°C per decade of “natural” global warming.  CO2 concentrations remained flat and low (~180 parts per million) throughout these warming (and cooling) periods, which are commonly referred to as Dansgaard-Oeschger events.  Schmidt and Hertzberg (2011) provide a summary and (modified) illustration of what these abrupt climatic shifts affecting the “Earth’s climate system” may have looked like.

“Unlike the relatively stable climate Earth has experienced over the last 10,000 years, Earth’s climate system underwent a series of abrupt oscillations and reorganizations during the last ice age between 18,000 and 80,000 years ago(Dansgaard 1984, Bond et al. 1997, 1999). …There are twenty-five of these distinct warming-cooling oscillations (Dansgaard 1984) which are now commonly referred to as Dansgaard-Oeschger cycles, or D-O cycles. One of the most surprising findings was that the shifts from cold stadials to the warm interstadial intervals occurred in a matter of decades, with air temperatures over Greenland rapidly warming 8 to 15°C (Huber et al. 2006). Furthermore, the cooling occurred much more gradually, giving these events a saw-tooth shape in climate records from most of the Northern Hemisphere.” 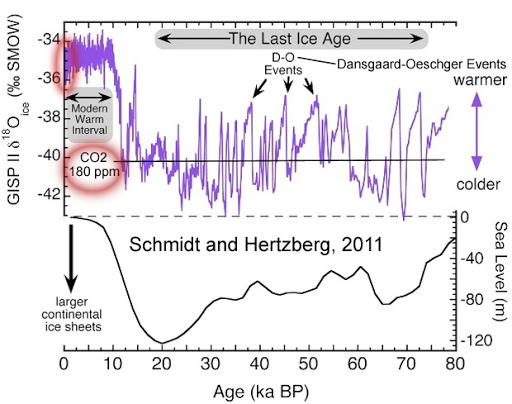 In contrast to these abrupt and profound warming events in the paleoclimate record, the IPCC indicated in their 5th report (2013) that the surface temperature of the Earth rose by 0.78°C between 1850 and 2012.   That’s a warming rate of a little less than 0.05°C per decade.

Putting these records together, it can therefore be concluded that global-scale warming and cooling events occur naturally at rates and amplitudes several times greater (multiple degrees per decade) than what has occurred since 1850 (<0.05°C per decade), and thus climate change in the modern period does not even come close to falling out of the range of what can and does occur naturally.  Also, it can be concluded that CO2 concentration changes have historically not been well correlated with abrupt temperature changes either in the paleoclimate record nor during significant portions of the modern period.

Below there are 8 scientific papers published in 2016 referencing these abrupt climate changes, some of which indicate a “global footprint” or “global signature” or “global distribution” of these warming and cooling events.

“Many northern hemisphere climate records, particularly those from around the North Atlantic, show a series of rapid climate changes that recurred on centennial to millennial timescales throughout most of the last glacial period. These Dansgaard-Oeschger (D-O) sequences are observed most prominently in Greenland ice cores, although they have a global signature, including an out of phase Antarctic signal. They consist of warming jumps of order 10°C, occurring in typically 40 years, followed generally by a slow cooling (Greenland Interstadial, GI) lasting between a few centuries and a few millennia, and then a final rapid temperature drop into a cold Greenland Stadial (GS) that lasts for a similar period. … [S]teady changes in ice-sheet runoff, driven by the AMOC, lead to a naturally arising oscillator, in which the rapid warmings come about because the Arctic Ocean is starved of freshwater. The changing size of the ice sheets would have affected the magnitude and extent of runoff, and we suggest that this could provide a simple explanation for the absence of the events during interglacials and around the time of glacial maxima.”

“Proxy data suggests a large variability in the North Atlantic sea surface temperature (SST) and sea ice cover during the Dansgaard Oeschger (DO) events of the last glacial. However, the mechanisms behind these changes are still debated. … Based on our analysis, we suggest that the variability of the subpolar gyre during the analyzed DO event can be explained by internal variability of the climate system alone. Further research is needed to explain whether the lacking amplitude in the Nordic Seas is due to the model deficiencies or if external forcing or some feedback mechanisms could give rise to larger SST variability.”

“The climate in the North Atlantic Ocean during the Marine Isotope Stage 3 (MIS 3) —roughly between 80,000 years before present (B.P.) and 20,000 years B.P., within the last glacial period—is characterized by great instability, with opposing climate transitions including at least six colder Heinrich (H) events and fourteen warmer Dansgaard–Oeschger (D-O) events. … The various theories on the causes include factors internal to the dynamics of ice sheets, and external factors such as changes in the solar flux and changes in the Atlantic Meridional Overturning Circulation (AMOC). The latter is the most robust hypothesis. At certain times, these ice sheets released large amounts of freshwater into the North Atlantic Ocean . Heinrich events are an extreme example of this, when the Laurentide ice sheet disgorged excessively large amounts of freshwater into the Labrador Sea in the form of icebergs. These freshwater dumps reduced ocean salinity enough to slow down deep-water formation and AMOC. Since AMOC plays an important role in transporting heat northward, a slowdown would cause the North Atlantic Ocean to cool. Later, as the addition of freshwater decreased, ocean salinity and deep-water formation increased and climate conditions recovered. During the D-O events, the high-latitude warming occurred abruptly (probably in decades to centuries), reaching temperatures close to interglacial conditions. Even though H and D-O events seemed to have been initiated in the North Atlantic Ocean, they had a global footprint. Global climate anomalies were consistent with a slowdown of AMOC and reduced ocean heat transport into the northern high latitudes.”

“The most frequent abrupt stadial/interstadial changes retained from the marine sediments are known as Dansgaard-Oeschger (D-O) cycles, and appear every 1-2 kyr. These cycles are characterized by abrupt short-lived increase in temperatures (10 ± 5°C) followed by gradual cooling preceding the next rapid event. A second millennial scale feature detected in the sediments record is cooling events culminating significant iceberg discharges analogous to Heinrich events. Mechanisms triggering abrupt changes display uncertainties, but leading hypothesis is attributed to modifications in the Atlantic Meridional Overturning Circulation (AMOC) and deep-water formation initiated by freshwater input.”

“The demonstration using Greenland ice cores that abrupt shifts in climate, Dansgaard-Oeschger (D-O) events, existed during the last glacial period has had a transformational impact on our understanding of climate change in the naturally forced world. The demonstration that D-O events are globally distributed and that they operated during previous glacial periods has led to extensive research into the relative hemispheric timing and causes of these events. The emergence of civilization during our current interglacial, the Holocene, has been attributed to the “relative climate quiescence” of this period relative to the massive, abrupt shifts in climate that characterized glacial periods in the form of D-O events.”

“We reconstructed upper forest line (UFL) positions between ~2000 and ~3400 m elevation and the most abrupt temperature shifts ranged up to 10 °C/100 yr at Terminations II and III. Regional vegetation change is mainly driven by eccentricity (100 kyr) and obliquity (41 kyr) cycles, while changes in local aquatic vegetation show variability in the obliquity and precession (21 kyr) bands. Millennial-scale climate variability reflecting Dansgaard–Oeschger (DO) climate cycles in the upper part of the record, continues in this penultimate intergalcial–glacial cycle strongly suggesting that this variability has a persistent character in Pleistocene vegetation and climate dynamics.”

“The glacial climate is dominated by the strong multi-millennial Dansgaard–Oeschger (DO) events influencing the long-time correlation. However, by separately analysing the last glacial maximum lacking DO events, here we find the same scaling for that period as for the full glacial period. The unbroken scaling thus indicates that the DO events are part of the natural variability and not externally triggered.”