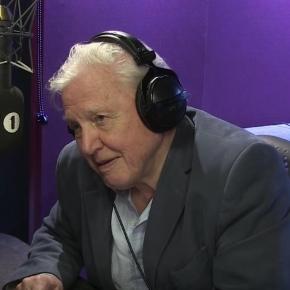 During an interview with “Radio Times,” Sir David Attenborough said shooting #Donald Trump wasn’t a bad idea if it saved the planet. The 90-year-old naturalist was talking about his new BBC series “Planet Earth II” and voicing his concerns about #Climate Change. Then the conversation moved to a conversation about the current #2016 Election.

When Attenborough was reminded of Trump’s 2012 tweet that said “climate change was created by and for the Chinese,” he said he was aware of that and reminded listeners that we’ve lived through previous presidents who were equally guilty. When asked if there were any other options and whether they had any power or sway over the U.S. election, he replied: “Of course we don’t.”

‘We could shoot him’

Then he giggled, lowered his distinctive voice, and said, “We could shoot him. It’s not a bad idea.” He then attacked voters who supported Brexit. He then questioned whether former Prime Minister David Cameron had the right to hold an EU referendum over Brexit in the first place.

Renowned naturalistAttenborough is a renowned naturalist, environmentalist, and public figure both publically and privately. He previously narrated the series “Planet Earth,” which aired on the National Geographic channel. The Rupert Murdoch-owned channel also aired the new climate change documentary “Before the Flood” over the weekend, which was produced and narrated by Leonardo DiCaprio. The Oscar-winning actor has come under heavy criticism for allegedly taking embezzled funds to enrich his foundation and living a “carbon-heavy lifestyle.”

When the Paris Climate Agreement passed, it allowed heavy carbon dioxide (CO2) emitter China to avoid participating in the accord until 2030. China is the biggest emitter of greenhouse gases, giving it a clear advantage in manufacturing. Other countries like the U.S. are required to cut CO2 emissions 26 to 28 percent below 2005 levels by 2025, which most experts say will avert global warming by 0.01 degrees.

Not the first time

Whether the U.S. Secret Service investigates this very public threat against Trump is unlikely as Attenborough lives in the U.K. and not likely to carry out any shooting. But suggesting violence against a presidential candidate is a crime so he may find himself in hot water with his sponsors like the BBC and National Geographic. Other people who have suggested shooting Trump include Glenn Beck and noted author Brad Thor.

Humans a plague on Earth

In 2013, Attenborough told “Radio Times” that humans were “a plague on the Earth” and that in the next 50 years, the population bomb will “come home to roost.”  He said we had to “limit population growth or nature will do it for us, and we are using up the world’s resources and preventing other species from thriving.”

Facebook
Twitter
WhatsApp
VK
Digg
Previous articleDicaprio puts new documentary on YouTube, ‘gets trolled into oblivion by climate deniers’
Next articleSir David Attenborough on Trump: ‘We could shoot him. It’s not a bad idea’

The legal fight to rescue the treasured forest from windpark industrialization has begun.
Read more

Cryptocurrency, which until recently received a climate pass from Californian anarchy money advocates, is increasingly being seen as a climate villain.
Read more