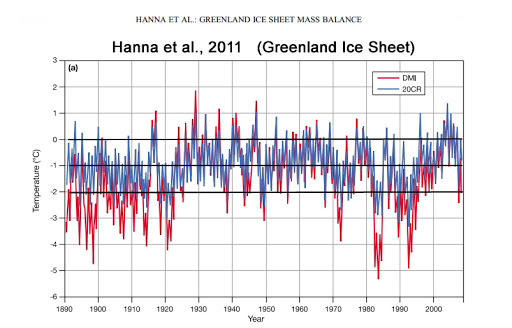 In 1942, eight U.S. WWII aircraft (2 bombers, 6 fighter planes) emergency-landed on the Southwestern coast of Greenland after encountering severe weather.   The crews were rescued and the planes ultimately had to be abandoned at the landing site.  So there the planes sat on the Greenland ice sheet, undetected, for more than 4 decades.  The active search for the WWII planes had been ongoing since 1981, but it wasn’t until 1988 that a group of artifact enthusiasts (Greenland Expedition Society) were able to finally locate the planes.  The primary reason why it was so excruciatingly difficult to find the planes is that the explorers  had originally assumed the planes were buried under ice that was relatively close to the ice sheet’s surface.  They weren’t.  When the planes were finally found in 1988, 46 years after crash-landing on the Greenland ice sheet, they were buried under 260 feet (79 meters) of ice. In other words, between 1942 and 1988, the Greenland ice sheet gained mass at a rate of 57 feet (17 meters) per decade at that location.  In 1992, the planes were impressively pulled out of the ice part-by -part.  In that 4-year span between 1988 (discovery) and 1992 (recovery), the Greenland ice sheet had advanced with another 8 feet of ice, as the planes were 268 feet beneath the ice sheet surface when they were rescued.