“The Arctic Ocean is warming up, icebergs are growing scarcer and some place the seals are finding the water too hot,” McClintock read in a Wednesday hearing, adding that reports “all point to a radical change in climate conditions and hitherto unheard of temperatures in the Arctic zone.”

McClintock went on, then asked President Barack Obama’s top climate adviser Christy Goldfuss if “this the crisis you’re referring to?” — referring to a new guidance her Council on Environmental Quality (CEQ) staff issued on accounting for global warming impacts of federal agency actions.

“It is a crisis we’re trying to address,” Goldfuss said, totally unsuspecting of what was about to happen. “I’m not familiar with that specific report…” Goldfuss added.

“Perhaps the reason is because it was November 2, 1922 that The Washington Post carried this article,” McClintock said.

It turns out McClintock was reading a Washington Post article from November 1922, not November 2015 as many listening, including Goldfuss, likely assumed.

In 1922, the National Oceanic and Atmospheric Administration (NOAA) reported “so little ice as has ever been noted” in the Arctic. A Norwegian captain told NOAA the Arctic “of that region is not recognizable as the same region of 1868 to 1917.”

“Many old landmarks are so changed as to be unrecognizable,” NOAA reported. “At many points where glaciers formerly extended far into the sea they have entirely disappeared.”
…

Here’s what he said:

“In fact, I attended the president’s address at Yosemite this last year. I was struck by his noting that the glaciers in Yosemite were disappearing, and it occurred to me, had he given that speech on that very spot 12,000 years before he would have been covered by nearly 3,000 feet of ice,” he said.

“Doesn’t that predate the invention of the SUV?”

Goldfuss: “What I can speak to is the facts that scientists are pointing to now. So, as has been rightly pointed out, I am not a climate scientist, but what I have been…”

M: “And neither am I, but I do know history, and our pre-history tells us the climate’s always changing. We know that during the Jurassic period 150 million years ago atmospheric carbon dioxide were five times higher than they are today and it was the planet’s prolific period for new species.”

“Do you deny this science?”

M: “I’m glad you brought that up because we know in recorded history that during the Roman warm period from about 250 to 400 A.D., much of Rome’s grain supply was grown in what are now the deserts of North Africa.”

“We know that during the Medieval warm period from the 10th through the 13th Centuries wine grapes were grown in northern Britain and Iceland and Greenland supported a thriving agricultural economy.”

“And we also know that during the Little Ice Age that followed, the Thames River froze solid every winter and advancing ice sheets destroyed many towns in Europe.”

McClintock then went on to press Goldfuss about the costs of the rule. 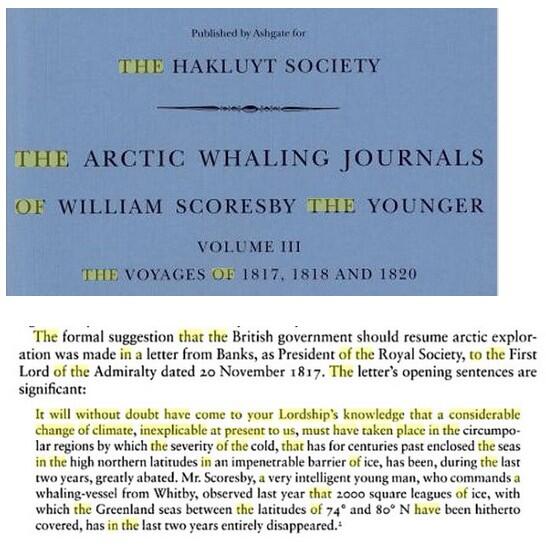 ‘A considerable change of climate, inexplicable at present to us, must have taken place in the circumpolar regions by which the severity of the cold, that has for centuries past enclosed the seas in the high northern latitudes in an impenetrable barrier of ice, has been, during the last two years, greatly abated…observed last year that 2000 square leagues of ice, with which the Greenland seas…have been hitherto covered, has in the last two years entirely disappeared.’

Flashback 2009: Study: ‘Arctic warming from 1910–1940 proceeded at a significantly faster rate than the current 1970–2008 warming’ – Published in Geophysical Research Letters – Study: ‘The Arctic temperature changes are highly correlated with the Atlantic Multi-decadal Oscillation (AMO) suggesting the Atlantic Ocean thermohaline circulation is linked to the Arctic temperature variability on a multi-decadal time scale.’

They also forgot to mention that Arctic warming is cyclical, and has nothing to do with humans.

18 Feb 1925, Page 12 – Oakland Tribune at Newspapers.com – “The latest investigations confirm the theory that the arctic climate has changed considerably in recent years. The temperature of the Gulf Stream, which in 1925, was higher than in the previous year, shows an average increase of from four to five degrees centigrade since 1900 when it was first measured by the explorer Nansen. The Chief proof of the change in climate is the remarkable shrinkage of the glaciers which have retreated from three to four miles, showing that the mild air has caused corrosion for a considerable time.” 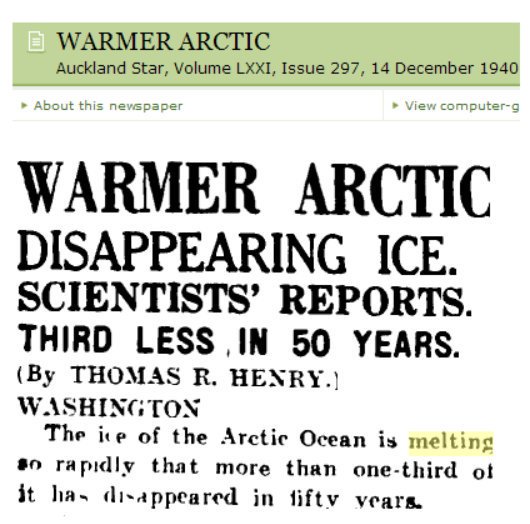 Aussie Climate Minister Celebrates the Signing a Letter of Intent

Have you ever seen John Kerry look less happy to be somewhere?
Read more

California Governor Gavin Newsom doubling down on the climate policies which are destroying quality of life for ordinary Californians.
Read more

This was sent to me by the Ball family Saturday evening. See note that follows. It is with deep grief that we announce the...
Read more