THE POPE’S BOSS — Wikileaks: Pope and Soros An Unholy Alliance

Among the many smoking guns uncovered in the Wikileaks data dump, lurks documents that should give Catholics great concern. The latest Wikileaks data dump of internal documents from George Soros’ Open Society Foundation exposes the most shocking of all his political alliances. According to the leaked Open Society Foundation documents, George Soros funds efforts to promote his radical socialist agenda of income inequality by using the bully pulpit of Pope Francis. Soros seeks to “engage the Pope on economic and racial justice issues” by lobbying the Vatican.

The unholy alliance and stategic plan is exposed in the leaked Open Society U.S. Board Meeting May 2015 book on page 16:

Pope Francis’ first visit to the United States in September will include a historic address to Congress, a speech at the United Nations, and a visit to Philadelphia for the “World Meeting of Families.” In order to seize this moment, we will support PICO’s organizing activities to engage the Pope on economic and racial justice issues, including using the influence of Cardinal Rodriguez, the Pope’s senior advisor, and sending a delegation to visit the Vatican in the spring or summer to allow him to hear directly from low-income Catholics in America.

The purpose of the Soros/Vatican collaboration skewers political to influence the 2016 U.S. Elections, thus securing the presidency for Soros’ handpicked candidate, Hillary Clinton.

The grant will also support FPL’s media, framing, and public opinion activities, including conducting a poll to demonstrate that Catholic voters are responsive to the Pope’s focus on income inequality, and earning media coverage that drives the message that being “pro-family” requires addressing growing inequality. By harnessing the Papal visit to lift up the Pope’s searing critique of what he calls “an economy of exclusion and inequality” and his dismissal of “trickle down” theories, PICO and FPL will work to build a bridge to a larger conversation about bread-and-butter economic concerns and shift national paradigms and priorities in the run-up to the 2016 presidential campaign.

The Soros’ foundation clearly views Pope Francis as an important ally in the Soros income inequality socialist movement and in the run up to the 2016 U.S. election. Notice how the radical leftists in the Soros reframe the wordspro family as “growing inequality.” This grant description highlights how the left hijacks language and exploits it for its own radical political advantage. Its partner in promoting the transformational lang uage is the leftist media. 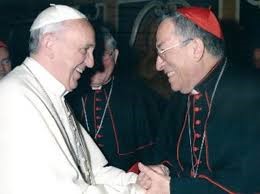 Another fascinating nugget in the Soros board meeting notes exposes its cozy relationship with Cardinal Rodriguez Maradiaga, the Vice Pope, and close confidante of Pope Francis. Cardinal Oscar Maradiaga of Honduras is described by the Soros operatives as ‘using his influence’ within the Vatican to promote the Soros radical economic inequality narrative. Clearly, Maradiaga has been identified by the Soros empire as a key player in the global radical income redistribution movement. Soros’ team knows that Maradiaga will happily promote this initiative within the Vatican and, most importantly, with Pope Francis, his close friend.

Who is PICO, the $650,000 grant recipient who will organize activities to engage the Pope on economic and racial justice activities? According to KeyWiki, PICO is

PICO, a progressive national network of faith-based organizations. Like health care reform, this newestPICO initiative aims to redistribute wealth by demanding that “faith leaders step into the big banks’ boardrooms.”

PICO National Network received a $600,000 grant from Soros’ Open Society Institute. PICO was founded in 1972 by John Baumann, a Jesuit priest trained in Saul Alinsky community organizing in Chicago in the 1960s. It was later patterned after COPS, a San Antonio, Texas project of Alinsky’s Industrial Areas Foundation.

The Open Society Institute describes PICO as “a network of congregation-based community organizations which brings the voices of people of faith and faith leaders to the public debate on national priorities,” and mentions other Soros funding beyond the main grant.

Soros tracks and funds its Vatican influence through PICO, among others. Open Society Foundation(OSF) recognizes that money spent at the Vatican is money well spent toward the global socialist Soros agenda. They’ve identified Cardinal Oscar Maradiaga as a sympathetic and willing promote the globalist cause. He will be a powerful ally and sympathetic ear to the Soros agenda.

Another key organization that is financially supported by Soros is the FPL standing for Faith in Public Life. FPL is given its marching orders in the grant. It also reveals the manipulation and stagecraft employed by the Left to skewer public opinion. OSF shockingly admits that the polling results by FPL are preordained by Soros, as set forth in the grant:

FPL’s media, framing, and public opinion activities, including conducting a poll to demonstrate that Catholic voters are responsive to the Pope’s focus on income inequality, and earning media coverage that drives the message that being “pro-family” requires addressing growing inequality.

There you go. FPL got its marching orders from its funder to conduct a poll and demonstrate that Catholic voters support Pope Francis on income inequality. Would you ever trust a poll again after seeing the collusion and connivance of the Leftist Soros philanthropy?

Who is FPL, otherwise known as Faith in Public Life? The innocuous and religious sounding organization is another radical leftist Soros funded organization that drives the left’s agenda in the faith community. In 2011 the American Thinker exposed the individuals behind FPL and their leftist organization.

Who could be against an organization that innocuously calls itself “faith in public life.” FPL is yet another of hundreds of Soros funded satellite organizations masquerading as well-meaning philanthropies which in reality promote a radical economic agenda of anti-capitalism and global redistribution.

How fortunate for Soros that he has a new found popular partner, who will promote the leftist agenda using the merciful strong arm tactics of the papacy. Catholics serve as a huge and influential voting block in the U.S. election. For Soros, using the head of the Catholic Church to influence this key voting block is reflecting in the OSF strategic planning notes. This is not the first time that the unholy alliance of Soros and the Vatican successfully collaborated on a political project.

In 2015, the Soros operatives, embedded in the Vatican, directed Pope Francis’ Environmental Agenda, by delivering for Soros and the UN, an Apostolic Exhortation on Climate Change, and a prized papal endorsement of the UN Sustainable Development Goals and the Pope’s apostolic blessing on the Paris Climate Treaty. Soros won the environmental trifecta sealed and delivered by Pope Francis.

Stay tuned, Catholics, for contrived polling data that reflects your overwhelming support for more global and carbon taxes to redistribute your income more equally. Soros will use the Vatican to promote Hillary, his hand-picked presidential candidate.

Remnant columnist, Elizabeth Yore, served on the Heartland Institute Delegation that traveled to the Vatican in April 2015 to urge Pope Francis to re-examine his reliance on UN population control proponents who promote climate change. We feature her work both here on our website and in our print edition.  To make sure you don’t miss any of it, subscribe to The Remnant right now.