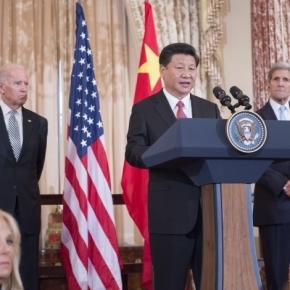 President #Obama, despite not having the support of the senate, will sign and ratify the Paris Climate Agreement this Friday, a Chinese news outlet is reporting. The news has set off alarm bells among opponents of the#Climate Change accord, which calls for nations to reduce greenhouse gas emissions to avert warming 1.5 degrees Celsius. Republicans have insisted that the pact is a treaty and must be ratified by the senate, as laid out in the U.S. constitution.

Obama and Chinese President XiJinping are planning to announce their joint ratification of the accord two days before the G-20 Summit begins on Sunday, September 4, in Hangzhou, Zhejiang. The Post also writes that “senior climate officials” from both governments have been working “late into the night” in Beijing to finalize the details. As climate change experts have noted, averting warming by 1.5 degrees won’t occur without a complete power shutdown of all greenhouse-emitting sources, which would send the world into a new stone age.

US and China to jointly announce ratification of Paris #climatedeal before G20, according to Chinese presshttp://www.scmp.com/news/china/policies-politics/article/2008593/landmark-step-china-and-us-ratify-paris-climate-deal …

China and US to ratify landmark Paris climate deal ahead of G20 summit, sources reveal

Move may tip momentum and bring accord into force at global level.

In the United States, only the senate can ratify treaties via a two-thirds vote. In communist China, however, a treaty only requires its leader to say, “So be it.” That’s according to Myron Ebell, the energy and environmental director at the free-market Competitive Enterprise Institute (CEI), who said Obama is ratifying a treaty the same way China’s communist dictator is doing it: by saying three magic words, “So be it.” Prior to being elected a second time, Obama repeatedly said he was not anemperor and he can’t wave a magic wand and do whatever he pleases. That changed in his final term.

Senator James Inhofe (R-OK), chairman of the Senate’s #Environment Committee, has cautioned other countries that without senate ratification, the Paris climateaccord would be dead in the water. Inhofe said in April that he wanted to make sure international participants knew President Obama was going rogue and didn’t have the support of his own government. As such, Inhofe said, the pact will fail. Obama’s Clean Power Plan, part of this climate treaty, has been put on hold by the Supreme Court while 29 states and industry groups have time to litigate its legality.

U.N. Secretary-General Ban Ki-moon has asked top emitters like the U.S. and China to accelerate the process of ratifying the accord after countries were slow to do it. Currently, China, the United States, the EU, and India are the top greenhouse gas emitters. The climate accord can only move forward if 55 nations representing at least 55 percent of global emissions ratify the agreement. Only 23 nations that cover roughly 1.08 percent of emissions have actually ratified the pact. Signing the accord is the first stage before ratification.

If the World Bank and British government follow through on their plan to ban the combustion engine, they may well have riots on their...
Read more