Washington DC – The federal National Oceanic and Atmospheric Administration (NOAA) is officially on record this Valentines Day as worrying about the future of Valentines Day around the world. NOAA send out a tweet and posted an article on NOAA’s “Climate.gov” website fretting about “climate and chocolate.”

NOAA asked: “Is chocolate your favorite Valentines Day treat? See how it is affected by climate.” 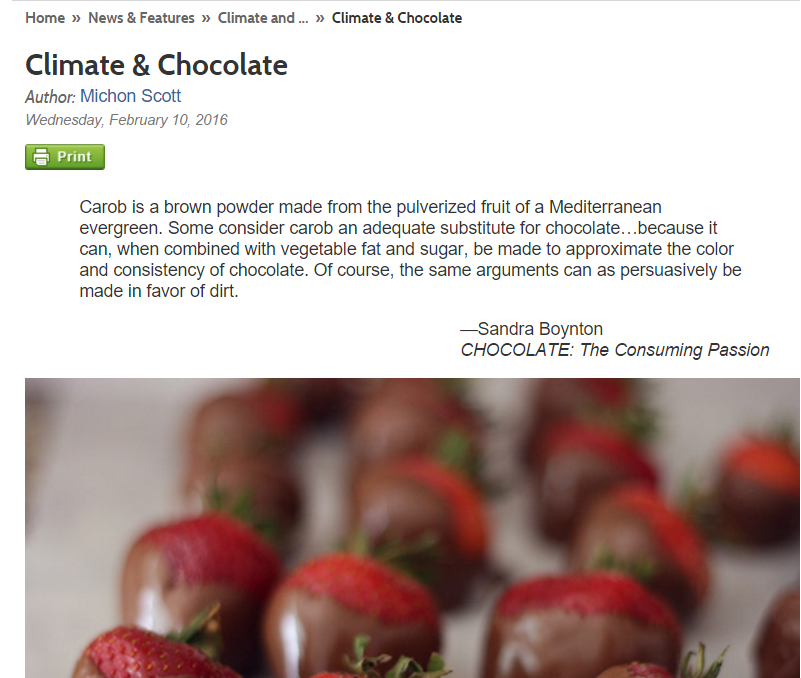 According to NOAA: “Chocolate grows best in the places where it would quickly melt in your hands. Over the next several decades, those places may grow warmer, drier, and less suitable to cacao cultivation. But with planning and adaptation, cacao farmers can keep producing our favorite treat.” (Feb. 10, 2016)

NOAA continued: “Research highlighted in the Intergovernmental Panel on Climate Change (IPCC) Climate Change 2014: Impacts, Adaptation, and Vulnerability report indicates that, under a “business as usual” scenario, those countries will experience a 3.8°F (2.1°C) increase in temperature by 2050, and a marked reduction in suitable cultivation area.” (Climate Depot note: It appears NOAA is ignoring the current satellite data which shows global temperatures at a standstill for nearly 19 years. See: Satellites: No global warming at all for 18 years 8 months )

The federal agency went on to address “helping chocolate cope with climate change.”

NOAA explained: “One adaptation strategy could be providing cacao growers with selectively bred seeds that have superior drought resistance. Another strategy involves a traditional cacao cultivation method that takes advantage of the conditions under which cacao naturally grows.”

The news that a federal science agency was dedicated to saving Valentines Day did not go over well with climate skeptics.

Steve Milloy of JunkScience.com wrote: “So Obama wants $4 trillion to fund the federal government to do nonsense like this?”

Env Defense Fund: Give us money or else CO2 will attack your nuts, chocolate, and wine

LA Times: ‘Climate change is poised to wreck Valentine’s Day’ — ‘Climate change is poised to wreck Valentine’s Day,or at least change it significantly,by threatening chocolate production’ – ‘Good point! Women generally don’t like neurotic men who fret over imaginary crap’
Quick! Enact a Carbon Tax! Warmist claims that CO2 will ‘take away’ pecan pie, chocolate, coffee, wine, and bacon; we’ll have to eat crickets – Grist Mag.: ‘Here’s the current list of delicious foods that climate change is going to take away: pecan pie, chocolate, coffee, wine, bacon. Now, a new addition: oysters. …As the climate changes, what we eat will, too. Instead of slurping down oysters, we’ll be crunching on crickets and calling it fancy’
Claim: Global Warming Could Lead to Vast Chocolate Shortage — ‘Will the prospect of losing their favorite dessert finally get people to wake up?’
Facebook
Twitter
WhatsApp
VK
Digg
Previous articleEPA Was Not Always Confident Regulating CO2 Would Be A Legal Slam Dunk
Next articleRush Limbaugh: Libs Come Up with Reason Algore’s Prediction Didn’t Come True

According to The Guardian, New York Governor Andrew Cuomo's Closure of Indian Point Nuclear Power Plant was a big step backwards in the battle...
Read more

Reposted from The MANHATTAN CONTRARIAN June 20, 2021/ Francis Menton The promoters of the climate scam have a variety of deceptions to get the gullible...
Read more

The political leadership and people of Hawaii understandably want to address the huge dependency of the state on high-cost petroleum for its electricity. But...
Read more