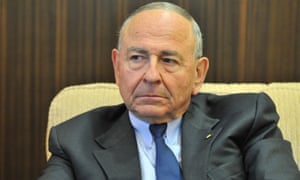 Maurice Newman has blasted the United Nations climate agreement reached recently in Paris. He says in a newspaper column that the UN is more about Marxism than science. Photograph: Julian Smith/AAP

Newman, who was not reappointed to the council by the Turnbull government, has accused world leaders of acting “like ancient druids pleading with the gods for good seasons” at the recent Paris climate talks.

Newman blasted the final Paris agreement, which aims to hold global temperatures to a maximum rise of 1.5C above pre-industrial levels, saying there was “no empirical scientific evidence” to support the policy.

He lamented that “without a Tony ­Abbott in Canberra or a Stephen Harper in Ottawa, no world leader utters a peep in protest”.

“They embrace junk ­science and junk economics and adopt wealth-destroying postmodern pseudo-economics, which teaches that taxpayer subsidies can produce desirable ‘economic transformation’ and faster growth,” Newman wrote in the Australian.

“Climate change has cowed once great powers into meekly surrendering sovereignty and independent thought to unelected bureaucrats in Geneva. From the White House to the Lodge, private choice now runs a distant second to collectivist visions.”

Newman repeated his previous assertion that the United Nations was more about Marxism than science.

“But then climate change is not about credible scientific evidence,” he wrote.

“It has its roots in Marxism, and ultimately the Green Fund is presided over by the UN Framework Convention on Climate Change, run by Costa Rican MarxistChristiana Figueres.”

Newman warned the 1.5C target would be “relentlessly pursued” by the UN with the help of the media.

“The media, in step with the Green ­Machine, will bombard us with climate alarmism to the applause of the leader of the free world, Barack Obama, who says: ‘My mission is to make the world aware that climate change is a bigger threat than terrorism.’ ­Really? That’s serious. Clearly authority, not common sense or science, now rules the world.”

Newman also accused the world’s largest emitter, China, of “adroit politics”, using climate change to act on its domestic air quality issues while promoting emissions restraints for other countries “for its own competitive advantage”.

He ridiculed plans for the United Nation’s Green Climate Fund to transfer money from “42 guilt-racked nations” to developing countries “regardless of the direction of world temperatures”.

“[Developing nations] left Paris happy that the UN’s Green Climate Fund, which aims to reach $US100bn a year by 2020, will give them cash for anything they can pass off as remotely ­related to their intended national contributions to world CO2­–reduction,” he wrote.

World leaders were succumbing to “bogus science and catastrophism” and considering abandoning fossil fuels – “the world’s cheapest, most ­efficient and wealth-creating power source” – in favour of “costly, ­­inefficient renewable energy”.