The New York Times published its list of the top new food words for 2015. Words and phrases that made this year’s list range from “beer o’clock,” one’s personal assessment of the right time of day to start drinking, to “hangry,” the state of being so hungry that you become angry or irritable.

But, the one word most relevant to the environmentally conscious is “climatarian.” The New York Times defines it as “a diet whose primary goal is to reverse climate change. This includes eating locally produced food (to reduce energy spent in transportation), choosing pork and poultry instead of beef and lamb (to limit gas emissions) and using every part of ingredients (apple cores, cheese rinds, etc.) to limit food waste.” 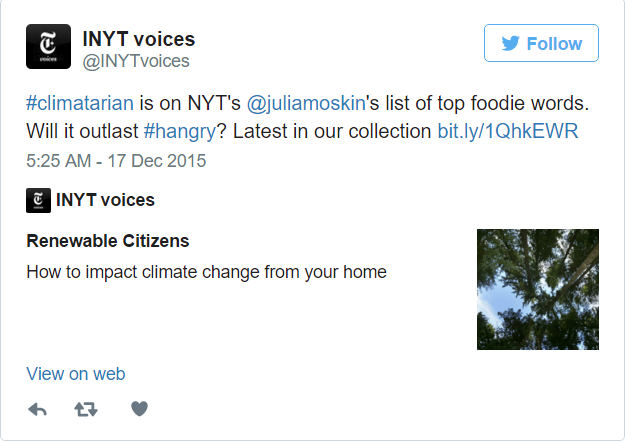 The word gained popularity this year in part because it was promoted by a group calledClimates (yes, the organization’s official name is formally half-bold). They encourage people to “go climatarian” and save a tonne (1.1 short tons) of carbon dioxide equivalent, which includes carbon dioxide, methane, nitrous oxide and other greenhouse gases. 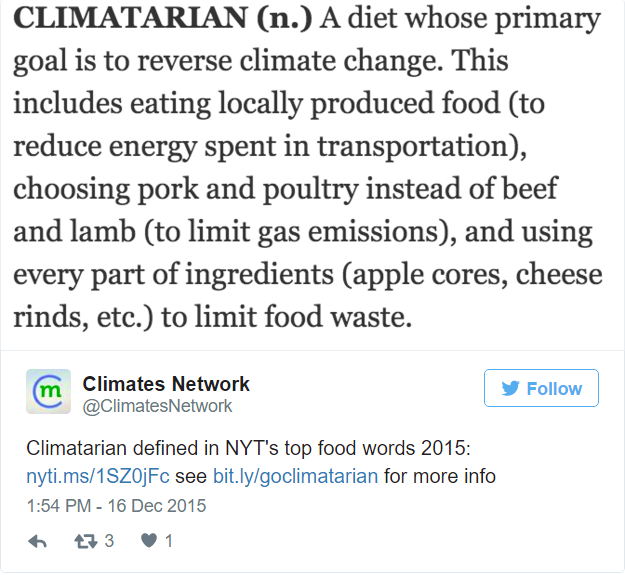 ‘The Colossal Hoax Of Organic Agriculture’ – As evolutionary biologist Christie Wilcox explained in a 2012 Scientific American article (“Are lower pesticide residues a good reason to buy organic? Probably not.”): “Organic pesticides pose the same health risks as non-organic ones.”

Analysis: ‘The majority of evidence that has been accumulated to date suggests that rising atmospheric CO2 concentrations may reduce the frequency and severity of pest outbreaks that are detrimental to agriculture’

Meteorologist Art Horn Letter to Connecticut State Dept. of Agriculture: ‘History is full of terrible storms when carbon dioxide levels were much lower than today. Ice core temperature reconstructions from Greenland clearly show us that weather is much more extreme when the earth is colder, not warmer’

Climate Depot’s Round Up on Global Warming and Meat Eating, Agriculture and Cows

Watch Now: Princeton U. Physicist Dr. Will Happer on CNBC on benefits of rising CO2: ‘1,000 ppm of CO2 would be beneficial for the productivity of agriculture’

Quick! Enact a Carbon Tax! Warmist claims that CO2 will ‘take away’ pecan pie, chocolate, coffee, wine, and bacon; we’ll have to eat crickets – Grist Mag.: ‘Here’s the current list of delicious foods that climate change is going to take away: pecan pie, chocolate, coffee, wine, bacon. Now, a new addition: oysters. …As the climate changes, what we eat will, too. Instead of slurping down oysters, we’ll be crunching on crickets and calling it fancy’