HomeMiddle ColumnStudy: 'Global warming 'could rob our planet of oxygen' - 'Would...
Middle Column

Study: ‘Global warming ‘could rob our planet of oxygen’ – ‘Would obviously kill most of life on Earth’ 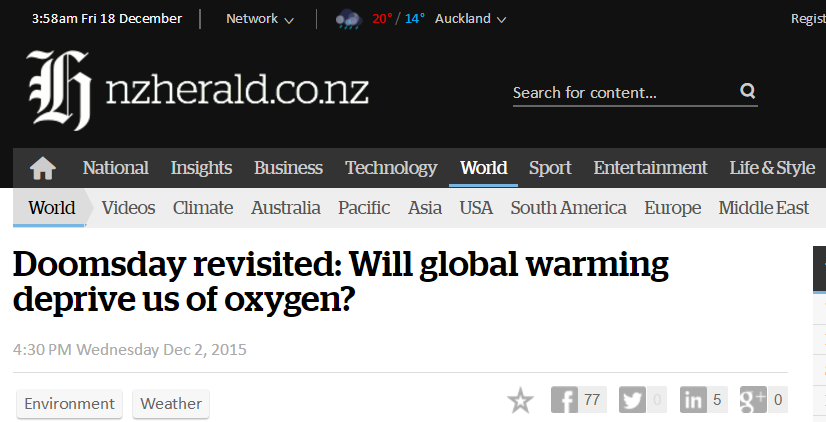 Global warming has triggered an array of apocalyptic scenarios for future generations, from worsening drought, storms and floods to melted icesheets and rising seas.

Now a new study, published on Tuesday and coinciding with the UN climate talks in Paris, adds to the grim tableau: the risk that warming at the far end of the scale could rob our planet of oxygen.

“We have identified another possible consequence of … global warming that can potentially be more dangerous than all others,” say a pair of scientists from Britain’s University of Leicester.

Their study, based in the peer-reviewed journal the Bulletin of Mathematical Biology, is based on a computer model of phytoplankton, the microscopic sea plants which produce about two-thirds of the oxygen in the atmosphere.

Dumb As It Gets: Germany Heads into Winter Refusing to Let Badly Needed Power Plants Operate

It’s about 5.6 million jobs affected by the lack of natural gas. It is not about taking shorter showers.
Read more

Claim: “I led the US lawsuit against big tobacco … Big oil is next”

Lawyer Sharon Y. Eubanks thinks the great legal weakness of Big Oil is their attempts to greenwash. She could have a point.
Read more

An ozone hole, seven times larger than the Antarctic ozone hole, is currently sitting over tropical regions and has been since the 1980s, according...
Read more