Arroyo: ‘Carol, some groups say the 2013 Intergovernmental Panel on Climate Change, that they failed to recognize this pause in global warming. Is that an issue? Do they have a point? There’s been this sort of 18 year pause where, you don’t, it’s not warming up?’  (See: Global warming ‘pause’ expands to ‘new record length’: No warming for 18 years 5 months)

Arroyo: ‘You can’t speak to that?’

Andress: ‘I can’t speak to that particular IPCC, uh…’

Andress: ‘…anomoly. Uh, the, I mean the fact is, you know, eh, the, uh, this is pretty basic physics, uh, what were talking about in terms of the gasses, uh, and the effect that they have on trapping heat, uh, the, eh, uh, it’s, an we, you know, the fact is, it’s common sense that if we’re going to be throwing at, be, if we’re going to be burning, eh, and putting unlimited pollution into the air, that eventually it’s going to have an impact.’

Morano: I can speak to that. And there has been according to the satellite data, 18 years 5 months currently with no global warming. If you look back at the ensemble of climate models  out of 117 — 114 models over predicted warming — predicted warming that did not occur. So the models have been failing.

Morano: In terms of the simple settled physics. we have had ice ages with CO2 five times higher than today. The geologic history of the earth contradicts these claims. Major UN scientists have not turned against the organization. Dr. Richard Tol, a lead UN author did a study and found the alleged 97% ‘consensus’ was pulled out of thin air.

Andress: Look, scientists are more certain about the human contribution to climate change than they are that smoking causes cancer. Now, are there still people who will maintain that smoking does not cause cancer? Sure, you can find those skeptics, they exist.

Morano: It’s offensive for her to mention tobacco. CO2 is a gas of life. It is not a pollutant under any definition of pollution. Let’s get that straight. And the United Nations and the IPCC scientists promoting this are handpicked by governments and the head of the UN climate panel had said they are at the back and call of governments. And what do those governments want? They have an agenda. They openly say they want to redistribute wealth by climate policy. So they are using the science as a partisan political campaign effort for centralized government planning through the United Nations. It’s a self enrichment tool, self-interest tool and a way they can be in charge of the developing world’s development. 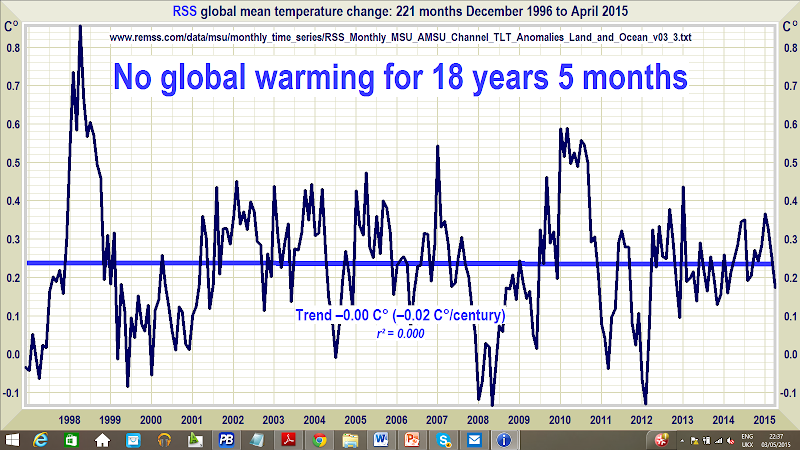 EWTN, America’s leading cable network for Catholics broadcast to 148 millions homes around the world, hosted a debate Thursday night about Pope Francis’ plan to insert himself into the center of the global climate debate on “The World Over with Raymond Arroyo.” The debate featured Marc Morano, executive editor and chief correspondent ofClimateDepot.com, versus Carol Andress, director of legislative operations for the Environmental Defense Fund (EDF).

If you are at all interested in the debate over what is really happening to our climate, and what we should do about it, you, (1) should attend or watch the live-stream of Heartland’s next climate conference in DC June 11 – 12; and (2) not miss this debate between Morano and Andress. Before we get to the video of the debate (embedded below) some set-up and commentary.

EWTN covered The Heartland Institute’s trip to Rome last month — which was an attempt to bring balance to the alarmism, flawed climate science, and wrong-headed agenda for the world’s poor the United Nations was presenting to the Vatican at its April 28 climate summit. EWTN reached out to Heartland this week asking for a DC-based member of the contingent we brought to Rome to talk about climate change and the Pope. Morano was my first choice to debate climate with the EDF, and he did not disappoint.

It is impossible to overstate what a blow-out this debate was for Morano. He was the Harlem Globetrotters to the EDF’s Washington Generals. The only things missing were the bucket of confetti trick and a dribbling exhibition by Curly Neal.

Bottom line: Morano brought the facts — relentlessly and firmly. Andress was criminally uninformed for someone in her position. She spent so much time stammering, everyone who is a part of EDF or supports it should be embarrassed.

A preview of one of many “money” moments for Morano: Andress admitting she couldn’t “speak to” why the latest report of the United Nations Intergovernmental Panel on Cliamte Change (IPCC) could not explain “the pause” in global warming that (so far) has stretched for 18 years and 4 months. Andress was obviously flustered by that question from Arroyo, and stammered out a litany of non-responsive talking points. Morano followed up by directly addressing the question with a torrent of specific facts.

This one-sided debate revealed a couple of things that should be troubling if you are supporter of the environmental left:

1. The people at the highest levels of your movement are wholly ignorant of basic facts about the earth’s climate.

Andress started out spewing stale, rote talking points about how “the science is settled,” and how you don’t have to be a scientist to see that we are now experiencing “weather on steroids.” Americans are experiencing more severe storms than ever before, she said, and it’s because of human CO2 emissions.

Morano countered those falsehoods with facts: Every day that passes sets a new recordfor a major hurricane failing to hit the mainland of the United States (category 3 or greater). The number of tornadoes swirling across the US are also at all-time lows.

Does Andress know these facts? Does she even care? Or does Andress think the public will ignore these facts if she and her allies in the movement repeat the alarmist talking points often enough? Does she not even realize the position she is defending is demonstrably false?

I think this is the answer: Most of the folks in the climate alarmism business are are so arrogant — so dismissive of “deniers” — they are not cognizant of their staggering ignorance of the actual science the “deniers” present to destroy their false talking points to a debate audience. Climate alarmists are so invested in the doctrine that human activity is causing a climate crisis that it never occurs to them to do the basic research necessary to defend their position.

That is why Andress stammered out cliches. She just doesn’t know any better than to mouth worn-out and unpersuasive talking points that do not stand up to Morano’s data about what is actually happening to the earth’s climate.

2. The people at the highest levels of your movement are taking in millions of dollars … but getting their butts kicked on the science and policy in debates on national television.

Carol Andress holds a senior position at an enormously influential and lavishly funded organization. The EDF’s website lists Andress’ areas of expertise as: “Climate Change, U.S. Congress, air quality, U.S. climate policy.” She sure didn’t show it on EWTN Thursday night. According to EDF’s 2013 990 form, the organization held $208 million in assets at the end of 2012 … and, yet, Andress’ embarassing performance was the best they could offer to EWTN.

Let’s put that into perspective. EDF is just one organization among an army of wealthy nonprofits (Sierra Club, Greenpeace, NRDC, etc.) agitating for climate alarmism. It raised and spent in just 2012 much more than what The Heartland Institute has raised and spent for all its programs since its founding in 1984. (Heartland is a broad, multi-issue, free-market think tank; we don’t just do climate.) You can see Heartland’s 2013 990 formhere. (NOTE: We’ve done well the last couple of years, but we have raised and spentmuch less than $5 million annually for most of our 31 years. Environmental donors might want to compare bang for the buck on that one.)

Enough set-up. Watch the video below, which is the whole program. Skip to 25:30 to see the Morano/Andress debate begin. The EDF stops being embarassed when it ends at about the 41:00 mark.

If you want to learn more about what’s really happening to our climate, attend Heartland’sTenth International Conference on Climate Change June 11-12 in Washington, DC. If you can’t attend in person, you can watch a live-stream of the truth the EDF can’t rebut atHeartland.org.

Facebook
Twitter
WhatsApp
VK
Digg
Previous articlePhoto: Irony is watching enviros protest oil in kayaks made from — petroleum!
Next articleWatch Now: Morano in lively TV climate debate with enviro lobbyist: ‘The points she just made are demonstrably not true’