Watch Now: Hostile 8 min. Climate Debate Between Morano & TV Anchor on CCTV: Morano: ‘You used the word ‘facts’ earlier, I hope you are not using that now. Every bad weather event is now proof of global warming?’ 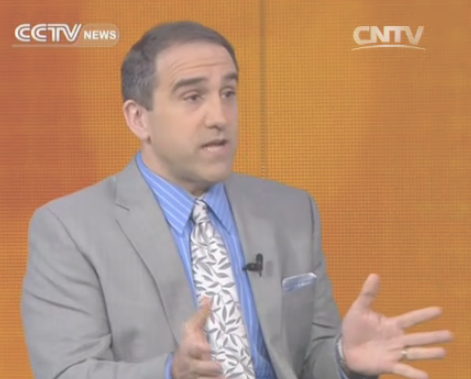 Marc Morano: You can distinguish between natural variability and the human impact.  Nothing unusual is happening in our climate.

President Obama claims we are feeling global warming here and now. But on every metric, you can talk tornadoes, hurricanes, floods, droughts. Not only are we not ‘feeling it now’, we are on no trend or declining trends on 50 to 100 year times scales.

Anchor Anand Naidoo:  But we are feeling it, we have seen hurricanes, for instance hurricane Sandy. We have seen more Tornadoes in the Midwest in America. We have seen ocean levels rise in Bangladesh.

Morano: First of all, you used the word ‘facts’ earlier, I hope you are not using that now. Every bad weather event is now proof of global warming? There is no way to falsify the AGW theory.

We are actually going through the longest period a category 3 or larger hurricane hitting the U.S. since 2005. That is the longest period in at least a century. Big tornadoes F3 and larger since the 1950s and 1970s have been on a decline. There might be more tornadoes counted, because we have better monitoring but actual damaging tornadoes, huge decline.  The most damaging decade for hurricanes was the 1940s. Droughts are on a decline in the U.S. (over the past century.)

Anchor Anand Naidoo: Are you saying nothing should be done?

Morano: Yes.  There so-called solutions would have no detectable climate impact. Our President Obama, is on record as calling our failed cap and trade bill would make our planet 4 or 5 degrees cooler for our grandchildren.  His then EPA director went to the US senate and testified that not only would the cap and trade bill not impact global temperature, it would not even impact global co2 levels. What they are proposing is pure symbolism. It is medieval witchcraft because they are saying we can alter through acts of congress, the EPA and United Nations treaties.

Every coal plant built today is radically cleaner than ones built 30 or 40 years ago. Natural gas fracking is replacing coal in many instances and that is causing dramatic reductions. Our emission levels are dropping due to technology. Not big government solutions brought up on by fear by people like John Holdren.

Look, in 1846, in Australia, Aborigines blamed the bad climate on the introduction of the White man in Australia. During World War 2, some blamed the war for causing unusual weather patterns. In 1933, Syria banned the Yo-Yo because they thought it caused drought. In the 1970s, the exact same things (bad weather) we are talking about today, were  blamed on man-made global cooling. 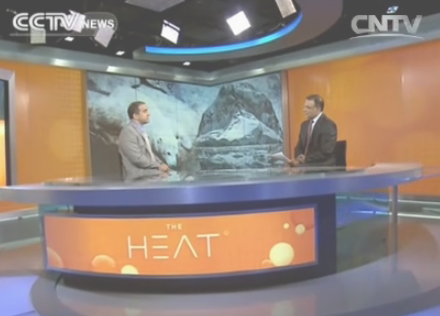 Anchor Anand Naidoo: But if you say nothing should be done, doesn’t this play into the hands of big energy, oil companies?

Morano: When faced with a non-problem – as Lord Monckton once said – the best thing to do is have the courage to do nothing. On every metric they are failing. When current reality fails to alarm, they make a bunch of scary predictions. That what this report is, it is a political report. Please be careful with the word ‘fact’ that was a disturbing word you used earlier.

Anchor Anand Naidoo: You may call it a political report. It is fact. 300 scientists were involved in compilation of the White House report. There were hundreds more scientists involved in the UN report. What are your qualifications in the climate?

Anchor Anand Naidoo: But this is climate science.

Morano: But the [Obama climate report] report you are referencing included Nature Conservancy, the Union of Concerned Scientists. It was written to cause a political agenda. And the American people are not stupid.

Morano: One donation from the from Natural gas industry – carbon based energy – to the Sierra Club of $26 million exceeded my [parent company CFACT’s total annual] budget by about five times – just one donation to Sierra Club.

I used to work for Senator Inhofe, when he was asked ‘how much does big energy’ give you? His answer was ‘not enough when you look at how well financed the greens are’

The Koch brothers, are only 59th giving in American politics. That is where they come in. You have billionaire democrats like Tom Steyer. Are you looking at into that? Are you worried about their bias right now?

Your last guest (Michael Dorsey) talked about minorities and African Americans the disproportionate impact of ‘global warming.’ The biggest impact that minorities, seniors, and people on fixed incomes face — are so-called ‘solutions’ which drive up the cost of our energy.

In the UK people have died this past winter because of commitment to green energy based on global warming fears.

President Obama has done us a favor in a way, because no one is going to take this report seriously. Al Gore has made global warming a partisan issue and Obama has furthered that cause.

Anchor Anand Naidoo: Well, I am not sure that no one is going to take this seriously.

Morano: Well, the usual suspects will.

Anchor Anand Naidoo: Obviously there are various viewpoints on this. Marc Morano, thank you very much for joining us.

Morano: Thank you very much.

Watch Now: Morano on Fox News on Fed Climate Report: ‘The report is very simply summed up this way: When current reality fails to alarm, make a bunch of scary predictions of the future’ – May 6, 2014 – Your World with Neil Cavuto on Fox News Channel

Watch Now: Marc Morano on TV explains Obama’s climate report: ‘It’s bastardizing science’ – ‘This is a political report meant to give cover for a political agenda’ – Morano: ‘Sarah Palin, the former VP candidate, was (unfairly) ridiculed for implying she could see Russia from her house or from Alaska. Well now they say you can see global warming from your back yard or out your window…They have basically said every storm now is proof of global warming. And we must ‘act now’ to stop bad weather. As though acts of Congress or our EPA can stop storms…This is a political report — predetermined science. They selected lead authors from Nature Conservancy, from Union of Concerned scientists from other environmental groups.’

Facebook
Twitter
WhatsApp
VK
Digg
Previous articleListen Now: Climatologist Dr. Pat Michaels on new Fed climate report: ‘I have read dozens of these compendia on climate change and this was the worst one I have ever read in my life.’ – ‘I was one of the reviewers on the report.’
Next articleGovernor ‘Moonbeam’ beclowns himself over sea level rise at LAX airport – ‘Brown says rising sea levels could force costly move of LAX’ due to global warming