Global Temperature Update: No global warming at all for 17 years 8 months – No Warming Since August 1996

By Christopher Monckton of Brenchley — Special to Climate Depot

No global warming at all for 17 years 8 months 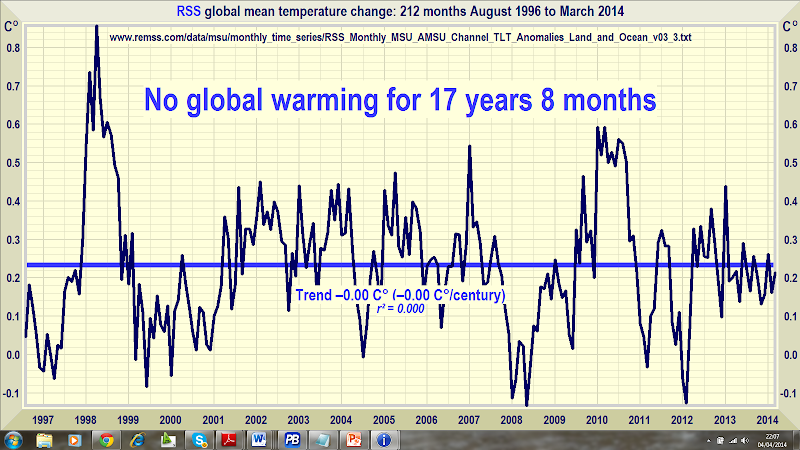 Dataset of datasets. The mean of the GISS, HadCRUt4, NCDC, RSS, and UAH monthly global mean surface or lower-troposphere temperature anomalies shows no global warming statistically distinguishable from zero over the 18 full years from March 1996 to February 2014. The 0.14 Cº trend over the 18-year period is within the ±0.15 Cº combined measurement, coverage, and bias uncertainties in the datasets. There may have been no global warming at all during the entire lifetimes of all students now in high school. Not that their teachers will have told them that.

The 18-year and centennial-equivalent warming trends on each of the five key datasets are:

Our latest topical graph shows the RSS dataset for the 212 months August 1996 to March 2014 – just over half the 423-months satellite record.

The graph is accurate. The data are lifted monthly straight from the websites maintained by the keepers of the datasets. A computer algorithm reads them down from the text file, takes their mean and plots them automatically using an advanced routine that automatically adjusts the aspect ratio of the data window at both axes so as to show the data at maximum scale, for clarity.

The latest monthly data point is visually inspected to ensure that it has been correctly positioned. The light blue trend line plotted across the dark blue spline-curve that shows the actual data is determined by the method of least-squares linear regression, which calculates the y-intercept and slope of the line via two well-established and functionally identical equations that are compared with one another to ensure no discrepancy between them. The IPCC and most other agencies use linear regression to determine global temperature trends. Interestingly, Professor Phil Jones of the University of East Anglia recommends it in one of the Climategate emails.

Dr Stephen Farish, Professor of Epidemiological Statistics at the University of Melbourne, kindly verified the reliability of the algorithm that determines the trend on the graph and the correlation coefficient, which is very low because the data are highly variable and the trend is flat.

Greenpeace Co-Founder Tells U.S. Senate: Earth’s Geologic History ‘fundamentally contradicts’ CO2 Climate Fears: ‘We had both higher temps and an ice age at a time when CO2 emissions were 10 times higher than they are today’