A Seattle judge has ruled this week eight teenagers can sue the #Government for not doing more to fight #Climate Change. King County Superior Court Judge Hollis Hill said the plaintiffs, ages 12 to 16, can have their day in court, writing in her ruling that “it is time for these youth to have the opportunity to address their concerns in a court of law…” Because none are old enough to vote, the lawsuit allows them to bypass the legislative branch by using the courts.

The children had wanted the judge to find the Department of Ecology (DOE) negligent in failing to protect them and future generations from global warming. Judge Hill noted the DOE had complied with the Clean Air Rule in the time frame set by the court and she denied their request. She did, however, allow the adolescents to amend their lawsuit so they could sue Gov. Inslee and the state of Washington for violating the public trust doctrine and constitution. 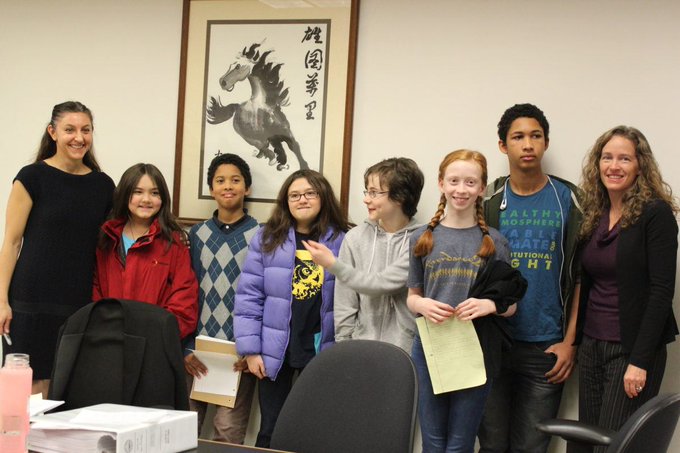 Kids’ Climate Lawsuit Gets Even Bigger, Heads to Trial in 2017 http://ow.ly/XXBA307jNww

Hill said the petitioners have a right to force Washington state to use science-based action to fight climate change before it’s too late or costly. Andrea Rodgers, an environmental lawyer representing the children, said this means they can go to court and argue their constitutional rights had been violated. Rodgers said the actions currently taken by the state are not lowering emissions as required by state law. The governor and state legislature dispute that claim.

This isn’t the first time youths have joined forces and sued over climate inaction. Last month a federal judge in Eugene, Oregon, said a similar climate change case against President #Obama could move ahead. In that complaint, kids aged 9 to 20 said the government had violated their constitutional “climate” rights to “life, liberty, and property.” The self-described “Earth Guardians” don’t believe the federal government is doing enough to slow climate change.

Despite Obama unleashing a torrent of climate regulations, rolling out the Clean Power Plan, and setting aside billions in executive actions to fight global warming, the man behind the Oregon suit, James Hansen, says those actions are toothless. Indeed, Hansen believes urgent action is needed as we are “running out of time.”

Hansen, an ex-NASA climatologist who raised eyebrows by publishing a non-peer reviewed paper to support his Oregon lawsuit, wants the judicial branch to impose a global carbon tax on all fossil fuel emissions. He also wants Big Oil to pay trillions for “emissions extractions.” And he doesn’t trust lawmakers or the executive branch to get it done.

A former NASA climate scientist is urging a full-court press against the fossil fuel industry to get the hundreds of trillions of dollars necessary for the next generation to combat global warming….

Enter the Oregon-based nonprofit Our Children’s Trust, an organization that uses a “game-changing legal campaign” to force emissions reductions at “all levels of government” by empowering youths. OCT has pending litigation in nearly all 50 states and has successfully moved cases forward in certain states. These cases, like many others, will undoubtedly get appealed. And with the Supreme Court expected to go conservative for an entire generation, petitions to the highest court may fall on deaf ears.

It’s unclear if a teenager, let alone a nine-year-old, understands the complex forces influencing our climate: oceanic cycles, geological disturbances, solar variations, El Niños and La Niñas, natural variability, the carbon cycle, the ‘greenhouse’ effect, plus a hundred other variables even seasoned climatologists find daunting. But it seems they have good instructors telling them carbon dioxide is a pollutant (it’s not), causing temperatures to rise, and only a lawsuit can fix it.

Facebook
Twitter
WhatsApp
VK
Digg
Previous articleKing Canute vs. the climate planners: UN treaty would have no climate impact even if you accept their ‘science’
Next articleTrump Puts Global Warming ‘Action’ on Ice

The Tragedy of the Climate Wars

Consistently demonizing those who think differently than you makes it harder, if not impossible, to forge alliances.
Read more

Flooding is terrible for those involved, but from a nationwide wide viewpoint is no more than an irritant. To deliberately peddle the lie that...
Read more