Another ‘no more Santa’ climate study to frighten children

A Svalbard reindeer – Photo by Per Harald Olsen, Wikimedia

With #Christmas only a few weeks away, a new study says the Svalbard reindeer are getting weaker and asks if Santa will need more muscle to pull his sleigh. So if your child hears about this so-called calamity from #News reports, remind them it doesn’t matter: Santa Claus uses the species ‘saintnicolas magicalus’, or flying reindeer.

With ostensibly warmer winters, the study notes rain is falling on snow and freezing into ice. That makes it difficult for the animals to get at plant food, leading some to go hungry and some females birthing undersized calves. The adults they tracked in the survey have lost 12 percent of their weight when compared to those born in 1994.

The ecologists behind the survey are from the Norwegian University of Life Sciences, the Norwegian Institute for Nature Research, and the James Hutton Institute. And their pointing the finger at #Climate Change. 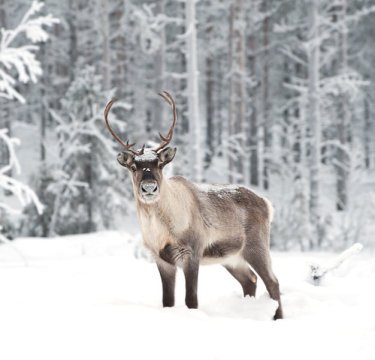 The burden to get at food during the winter hasn’t stopped the reindeer population from growing from 800 to 1,400 in only two decades. The scientists believe the wealth of food in the late spring and summertime from a 1.5-degree Celsius rise in temperatures is allowing the reindeer to thrive and for females to conceive more calves in the fall. It’s also making competition for snow-covered plants more difficult, especially in the winter when plant life is limited.

The study’s authors have been measuring, weighing and marking the Svalbard calves since 1994. Every winter they return, recapture them and measure their size and weight as adults. That’s how they determined the discrepancy in their sizes. But the theory of rain freezing out the herbivores’ food doesn’t match rainfall statistics for the Svalbard island chain.

The Nordic visitor’s guide describes the Svalbard islands as an “Arctic desert” with annual rain and snowfall totaling a meager 200 to 300 millimeters. They also note that during much of the winter temperatures range between -20 (-4.0°F) and -30 (-22°F) degrees Celsius. And even though Svalbard lies close to the North Pole, the “archipelago has a mild climate compared to areas at the same latitude” due to the intersection of ocean and air currents. It’s also home to the Arctic fox and the formidable polar bear.