National Geographic released the new 95-minute-long movie “Before the Flood” created by Leonardo DiCaprio on their YouTube channel:

DiCaprio is facing trouble because they caught him when he was misappropriating a rainforest fund in an international money laundering scandal so he surely hopes that this movie will help him to decriminalize himself.

It’s probably the most superficial movie on the climate issue that has been released so far, beating even No Pressure 10:10, An Inconvenient Truth, The Times of the Stupid, 2055, and many other “masterpieces”. DiCaprio never goes beyond the manipulative one-sentence slogans that everyone must have heard about one million of times. What is annoying is that DiCaprio isn’t just a fool. He is a pompous fool and that’s the kind of creatures that I simply cannot stand. So he could afford to fly to many corners of the world including the polar regions and has befriended many famous or notorious people. But none of these things implies that he has a clue what are laws that the climate actually obeys and what’s going to happen with it – a trivial fact that he implicitly tries to obfuscate all the time.

He must be right when they paid for a helicopter to go here or there, he wants millions of stupid viewers to think, and some of them will.

At the beginning, we learn a few things about DiCaprio’s dad. He was a fan of Andy Warhol or whatever. Then we’re shown some paintings of Adam and Eve. There are additional paintings of the characters from the Bible, a few generations after Adam and Eve.

I exploded in laughter when a picture with dozens of people from the Biblical times was described as “overpopulation”. Well, if someone is terrified by the “overpopulation” 2,000 (or even 3,000+) years ago when there were just a few hundred million people in the world (the Roman Empire had about 50-60 million near the 4th century CE), the contemporary world must surely make him nuts. 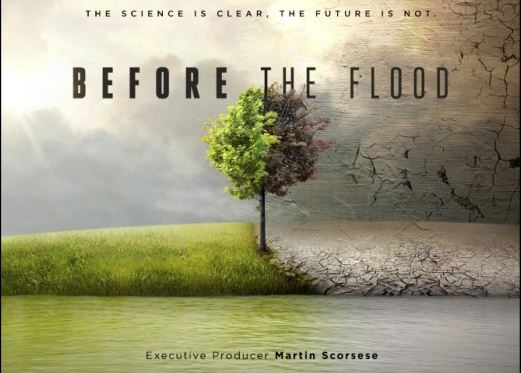 But it’s obvious that the Earth has no trouble to feed the 7+ billion people today and even without any new technologies, a world with tens of billions of people is easily imaginable.

We’re shown various famous and notorious friends of DiCaprio’s – Ban Ki-Moon, Al Gore, Bill Clinton, the Pope, Barack Obama, John Kerry, Elon Musk, Michael Mann and several others. All of them only say one or two sentences that you could absolutely predict. All skeptics are paid by the fossil fuels, of course (including all the authors of hate mail that Michael Mann has received: does Mann really believe that all the tens of millions of people who consider him a shameful deceitful scumbag are funded by Exxon?), a few degrees of warming is enough to melt the Greenland (sorry, you need more than 10 °C to melt most of the Greenland ice and something close to 50 °C to do it in the Antarctica), the dirty smoke from Chinese chimneys is the carbon dioxide that causes the global warming (sorry, CO2 is invisible, odorless, and harmless for human health so it has nothing to do with the pollutants we know from the chimneys), and so on, and so on.

Everyone with the IQ above 90 must be offended by the sheer stupidity of this film and its father.

He pretends that all the assorted pessimistic pictures are examples of the climate change. So some people in India are poor, that must be due to the climate change. (India has never been really rich.) Some street was flooded somewhere, it must be due to the global warming as well (sorry, floods like that have existed for billions of years), and there are dozens of absolutely ludicrous examples like that in the movie. A person who takes most of this stuff seriously has such a hopeless brain that I recommend him euthanasia.

I am thinking about a comparison of this film e.g. with Durkin’s The Great Global Warming Swindle – and several other good introductions into the debate. (Marc Morano told me that I should get a DVD of his new film but so far, I can’t tell you anything about it.) The comparison isn’t really possible. They are not comparable films at all. Durkin’s movie, to be specific, is an excellent piece of popularization of science which really does provide you with a review of the history of the climate, the greenhouse effect, lots of other effects that influence the climate, as well as the economics and psychology and politics of the broader political interactions that refer to the climate change.

DiCaprio’s movie is a superficial kitsch that can only sell some cheap incoherently mixed scenes, emotions, and irrational associations to the most gullible of imbeciles in the world.

In the Gigafactory, DiCaprio asks Musk how the batteries will help the third world. Needless to say, the right answer is that they won’t help at all. The batteries, Musk’s solar panels, and Tesla cars are only being bought by overpaid, overrated, and hypocritical green clowns in places like California, not actual consumers who are rationally comparing costs and benefits (let alone those who have a hard time to survive). Instead, Musk promises to make batteries that will replace all energy sources on Earth (he forgot Mars in that particular scene).

Mankiw, a not-left-wing economist, promotes the carbon tax. Every economist may think about the numbers received from carbon taxes, weather taxes, or fart taxes (the latter is already a law in California) but that doesn’t mean that any of these things is at least marginally wise. It’s not.

Some fearmongering from John Kerry follows. My stomach is too irritated at this moment and I can’t swallow everything that is being shown now. A view almost wants to throw up. Another scene with an academic fearmonger shows how everything will collapse when the globe warms by 2 °C. Nothing qualitative will change in the wake of modest changes like that. Just in tens of thousands of years, the global mean temperature was changing in a 10-degree window, and almost everything about the composition of life forms on Earth was exactly the same as it is today.

OK, they bury any agriculturally useful plants near the equator after 3 °C of warming. Give me a break. Soon after 3 °C, they declare a “tipping point”. The ice-albedo feedback will make the Armageddon a matter of years. But the Paris Agreement may save the world, LOL. At least, DiCaprio admits that the agreement is a worthless piece of toilet paper in the U.S. Barack Obama tells Leonardo that he won’t save the world right now but maybe in 20 years. All these things really look like they are making fun of themselves. But these idiots actually want you to take the scenes – and themselves – seriously.

Obama is worried that billions of people will start to move because of climate change, so it’s a national security issue.

…
Some random forecasts of the regional temperatures are shown on big screens. The garden of Eden is said to be overpopulated once again. DiCaprio meets and kisses the Pope and gives him a children’s book. While he pretended to build on science, now DiCaprio demands prayers. DiCaprio speaks to the U.N. as its Messenger of Peace (peace be upon this prophet). The unhinged Messenger of Peace declares the total war against all the skeptics, the fossil fuel companies, and most of the world economy.

The final minutes show captions – written instructions with duties that the viewers are obliged to fulfill. Eat this and not that, vote these and not those politicians, open these website but not those etc. Sadly, millions of brain-dead people exist who will follow the instructions.

The climate science community – and, to some extent, the whole science community – is just incredibly ill because it basically silently allows clowns like DiCaprio to pretend that they’re competent to teach the mankind about the science – even though they obviously fail even in the 3rd grade science from an elementary school. Almost no one who is currently employed as a natural scientist dares to point out that DiCaprio is a full-fledged crank and why. This clique of cranks in Hollywood and elsewhere has turned itself into the supervisors of the Earth Sciences and they would love to become the supervisors of all the science and the mankind, too.

Facebook
Twitter
WhatsApp
VK
Digg
Previous article‘If experts had been right about sea ice, there would be no polar bears in Churchill’
Next articleDismal ratings for DiCaprio’s Global Warming Epic ‘Before the Flood’ – beaten by ‘Bubble Guppies’