The complete UAH v6.0 data for June were released yesterday.  I present all the graphs for various regions, and as well summaries for easier comparison.  The Pause still refuses to go away, despite all expectations.

These graphs show the furthest back one can go to show a zero or negative trend (less than 0.1 +/-0.1C per 100 years) in lower tropospheric temperatures. I calculate 12 month running means to remove the small possibility of seasonal autocorrelation in the monthly anomalies. Note: The satellite record commences in December 1978- now 37 years and 7 months long- 451 months. 12 month running means commence in November 1979. The y-axes in the graphs below are at December 1978, so the vertical gridlines denote Decembers. The final plotted points are June 2016.

The 12 month mean to June 2016 remains at +0.46C and should stay at about this value for the next two months.  If so, The Pause, (now 1 month shorter), will continue to be an embarrassing reality! However, it may end soon after with a small positive trend.

And, for the special benefit of those who think that I am deliberately fudging data by using 12 month running means, here is the plot of monthly anomalies, which shows that The Pause is over by my rather strict criterion: 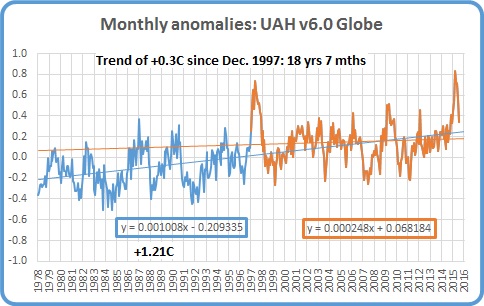 +0.3C/100 years since December 1997- not exactly alarming.  The Pause will return sooner with monthly anomalies than 12 month means of course. 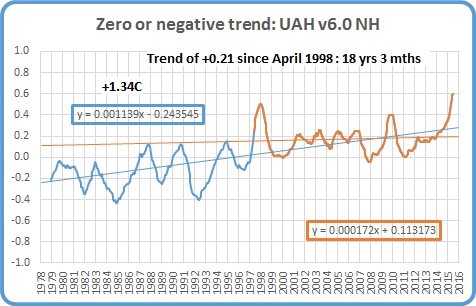 The Northern Hemisphere Pause has ended as expected.  Note the not very alarming warming of 0.21 +/- 0.1C per 100 years for half the record compared with 1.37C for the whole period.

The Pause has shortened by 2 months.  For well over half the record the Southern Hemisphere has zero trend. 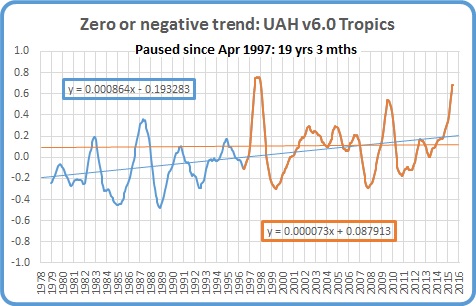 The Pause has shortened by another 3 months with the El Nino influence, but is still over half the record. 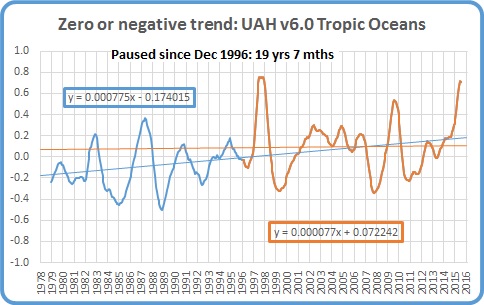 The Pause has shortened by another 2 years- the El Nino now having a strong effect on the 12 month means. 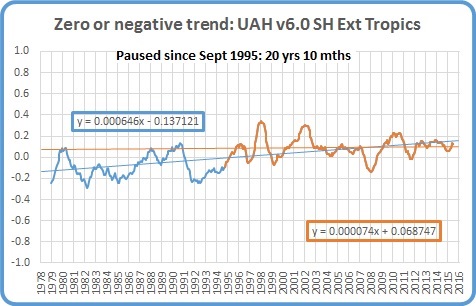 The Pause has lengthened by another month.

The Pause has decreased by 1 month.

The South Polar region has been cooling for the entire record. 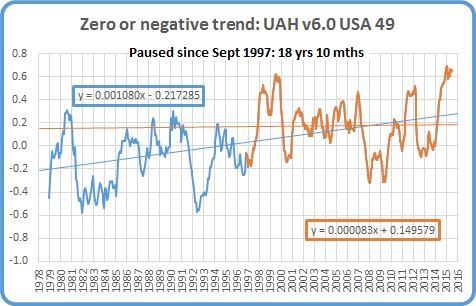 The Australian Pause has not changed.

The next graphs summarise the above plots. First, a graph of the relative length of The Pause in the various regions:

Note that the Pause has ended by my criteria in the Northern Extra Tropics and the Northern Hemisphere, but apart from the North Polar region, all other regions have a Pause of 18 years 8 months or longer- well over half the record, including the South Polar region which has been cooling for the whole record.

The variation in the linear trend for the whole record, 1978 to the present:

Note the decrease in trends from North Polar to South Polar.

And the variation in the linear trend since June 1998, which is about halfway between the global low point of December 1997 and the peak in December 1998: 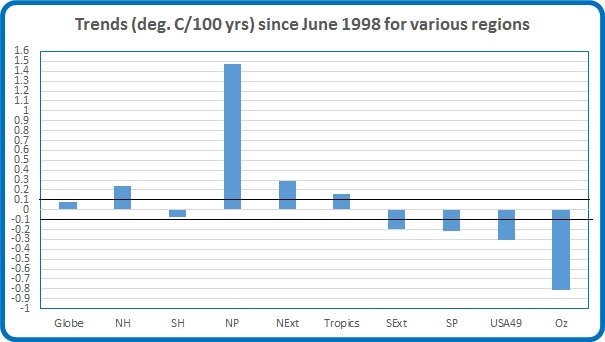 The only region to show strong warming for this period (18 years 1 month) is the North Polar region: the Northern Extra Tropics, Tropics, and the Northern Hemisphere have very mild warming but all other regions (including the Globe as a whole and all of the Southern Hemisphere) are Paused or cooling. The imbalance between the two hemispheres is obvious. The lower troposphere over Australia has been strongly cooling for more than 18 years.

12 month means will continue to grow in some regions for the next few months, so the Pause as here defined may end in some regions shortly (probably North Polar, Tropics, and Tropical Oceans), and may not reappear until early 2018.  The impact of the coming La Nina will be worth watching.  Unless temperatures reset at a new, higher level and continue rising, very low trends will remain.

Facebook
Twitter
WhatsApp
VK
Digg
Previous article‘Global Warming’ Pause Continues: ‘It looks as if there will be no statistically significant difference between 2016’s temperatures & 1998’s’
Next articleCheers! ‘Carbon markets in US, Europe & Asia are collapsing, with prices so low they’ve become virtually valueless’