Imagine if instead, cancer cells had the ability to press on to another body. A cancer like that would have the power to metastasize not just from organ to organ, but from person to person, continuing to evolve deadly new skills along the way.

While there is no sign of an imminent threat, several recent papers suggest that the eventual emergence of a contagious human cancer is within the realm of medical possibility. This would not be a disease, like cervical cancer, that is triggered by the spread of viruses, but rather one in which cancer cells actually travel from one person to another and thrive in their new location.

One theory is that the animals are unusually vulnerable. Driven so close to extinction — by climate change, perhaps, or human predators — the species is lacking in genetic diversity. 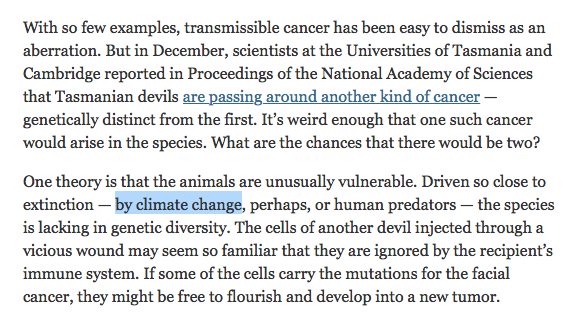 by Jim Steele  8/15/2022 I want to thank Dr. Alan Longhurst for alerting me to the BBC’s fearmongering. He requested that I address the...
Read more

This is contrary to multiple previous studies that claimed to account for ENSO.
Read more