Failed Math: In 1997, NOAA claimed that the Earth was 3.83 degrees warmer than today

Yesterday, to much media fanfare, wailing, and gnashing of teeth NOAA pronounced that 2015 was the hottest year on record, ever! There’s only one problem with that…the Internet never forgets. Back in 1997 after the super El Nino made global temperatures soar, NOAA/NCDC produced this report: 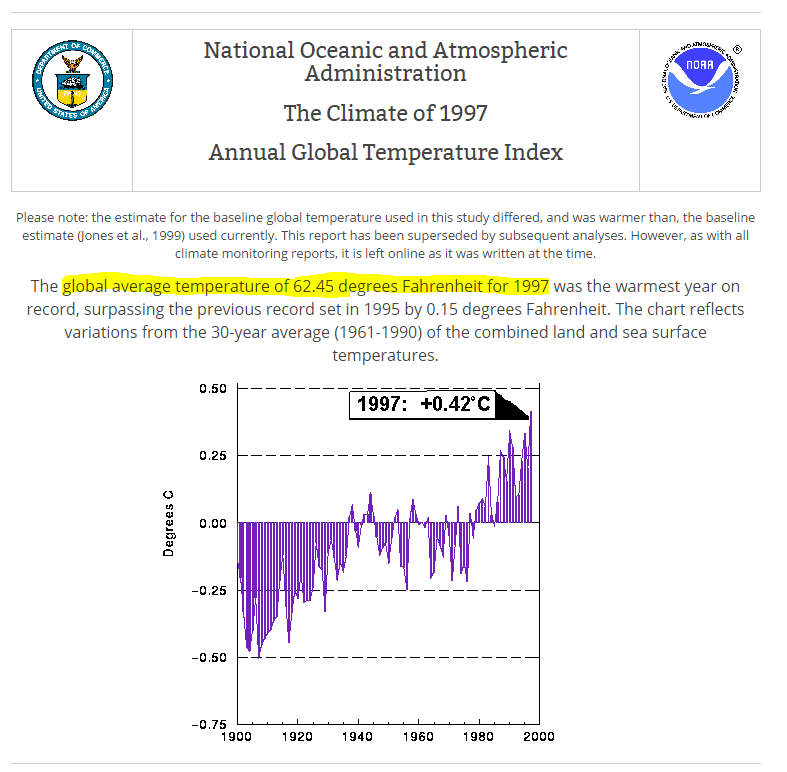 In that 1997 report, they say clearly that the Global Average Temperature (GAT) was 62.45°F, based on a 30-year average (1961-1990) of the combined land and sea surface temperatures. Since we know the 1997 El Nino caused a record high spike in temperature, that means that for that 30 year period, there was no warmer GAT than 62.45°F up until that time.

During 2015, the average temperature across global land and ocean surfaces was 1.62°F (0.90°C) above the 20th century average. This was the highest among all 136 years in the 1880–2015 record, surpassing the previous record set last year by 0.29°F (0.16°C) and marking the fourth time a global temperature record has been set this century.

In the 2015 Annual State of the Climate report referenced above, NOAA says that the temperature was 1.62°F (0.90°C) above the 20th century average. That’s an important number. While they don’t reference the absolute value of the 20th century average temperature for the globe in that report, we can find it here in the November 2015 State of the Climate Report: