TORONTO – A northern Ontario bridge that is part of the Trans-Canada Highway has been closed indefinitely, police said on Sunday, after media reports it split because of extremely cold weather.

The Nipigon River Bridge, a cable-stayed bridge that opened in November, was closed because of “mechanical issues,” Ontario Provincial Police said. Twitter images showed a gap splitting the highway. 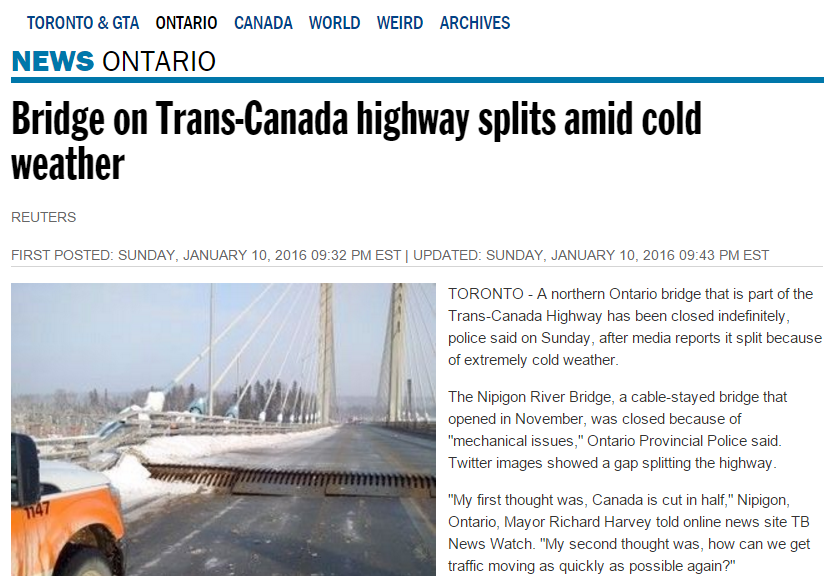 How cold weather could have played a role in the failure of the Nipigon Bridge – Jan. 11, 2016 – Ontario experienced a deep freeze. In Nipigon, the temperature went from -6.3 C on Saturday to -15.7 on Sunday. As well, the area experienced high wind gusts as the system bringing the cold weather rolled in…When it comes to the cold weather, bridges — typically comprised of steel cable and concrete — react just like anything else. The steel and concrete expand in warm weather and contract in cold. The cables of a cable-stayed bridge like the one in Nipigon are fasted from a main tower to the ends with bolts. In the cold, the steel in the cables would contract causing the bridge to want to uplift. But that’s what the bolts at the ends are for: to counter that. Though it’s unknown what happened, Green said that it could have been a combination of factors that made the perfect storm: cold weather could have compromised the bolts and the wind could have caused uplift. If the cables had iced, that could have compromised the bridge as well.

“I was skeptical at first, but after doing a Google search – and after NBC reported Sunday that National Transportation Safety Board investigators are “looking at everything” including “the weather” – I think it is a legitimate question to ask.”

Keep your seatbelts fastened, for it got better:

Melissa Hortman of the Minnesota House of Representatives “speculated that 90-plus-degree heat Wednesday and the above-normal temperatures of the past two summers may have been a contributing factor,” and said “You wonder if this bridge was built to withstand the massive heat we have had this summer.” Or even if it was built to withstand heat, whether its structural deficiencies undermined the design integrity to a point where heat contributed to the collapse.

But, in my experience, those “adapters” are actually not interested in finding out what the impacts of global warming are…

Certainly climate change will have the biggest infrastructure impact on our coastal cities, water and sewage systems, levees, and electric grid. But given that a remarkable 70,000 other bridges in the country are also structurally deficient, we should seek to learn whether such troubled bridges can take the ever-growing stresses generated by global warming. We need to be as prepared as possible for a changed climate – as the Center for American Progress has previously argued. Indeed, if the adapters have their way in blocking serious efforts aimed at prevention, we’ll need to be prepared for the very worst.

A few days ago, the Washington Post ran a story that ranks as one of their worst-ever in terms of climate change alarmism. Titled...
Read more

“For me the question now is, now that we know that renewables can’t save the planet, are we going to keep letting them destroy...
Read more

To the surprise of most Americans, and the consternation of many in the “mainstream” media, Vice President Mike Pence highlighted the Trump Administration’s environmental...
Read more