But meteorologist Dr. Ryan Maue is countering the media hype that the storm currently hitting the Arctic is caused by mankind.

‘That’s utter bullshit,” Maue declared on December 29, in a response to the Washington Post’s claim that the Arctic event “reeks of a human-forced warming of the Earth’s climate.” 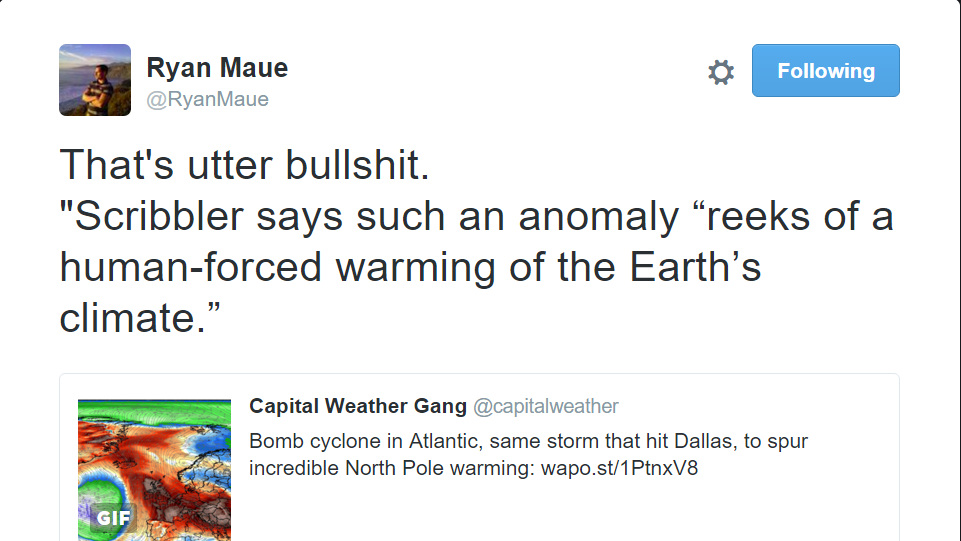 Maue added: “Who is feeding the media this crap?”

Meteorologist Joe Bastardi also weighed in, calling media reports of a melting Arctic, the “lunatic fringe.” Bastardi noted that before this storm, “Arctic temperatures are way below freezing.” 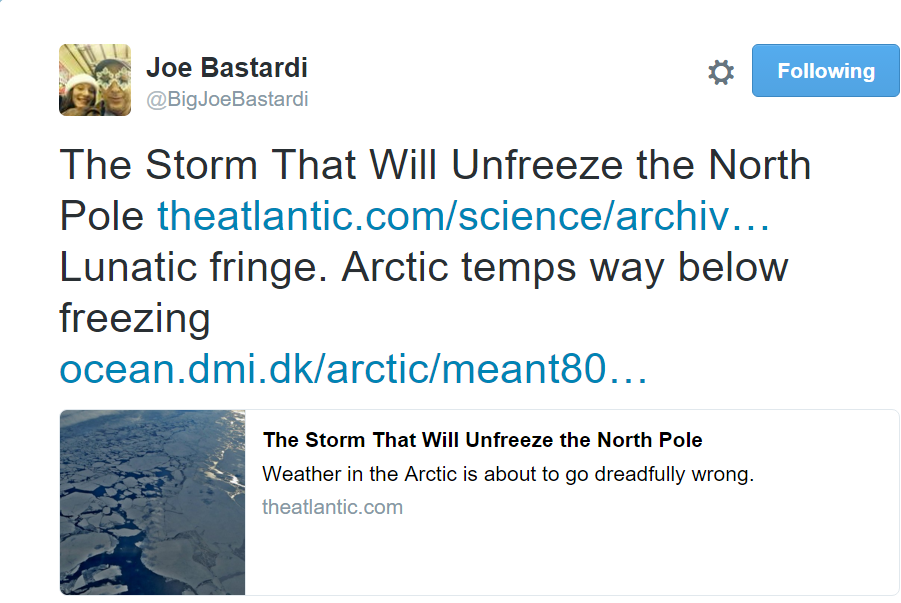 The blog RealClimateScience.com noted today that Arctic sea ice extent was at a 10-year high, despite the media hyped storm.

“Earlier today, sea ice extent was at a 10 year high. But experts say it all melted during one hour at -1C this afternoon,” wrote Tony Heller at RealClimateScience.com, with more than a hint of sarcasm. Heller also noted that “Arctic ice is screaming back towards 1990’s levels.”

“This unprecedented melting event has caused Arctic ice to reach its highest December extent in over a decade.” Ocean and Ice Services | Danmarks Meteorologiske Institut  Note: DMI issued this this notice on above graph. “The plot above replaces an earlier sea ice extent plot, that was based on data with the coastal zones masked out. This coastal mask implied that the previous sea ice extent estimates were underestimated. The new plot displays absolute sea ice extent estimates. The old plot can still be viewed here for a while.” 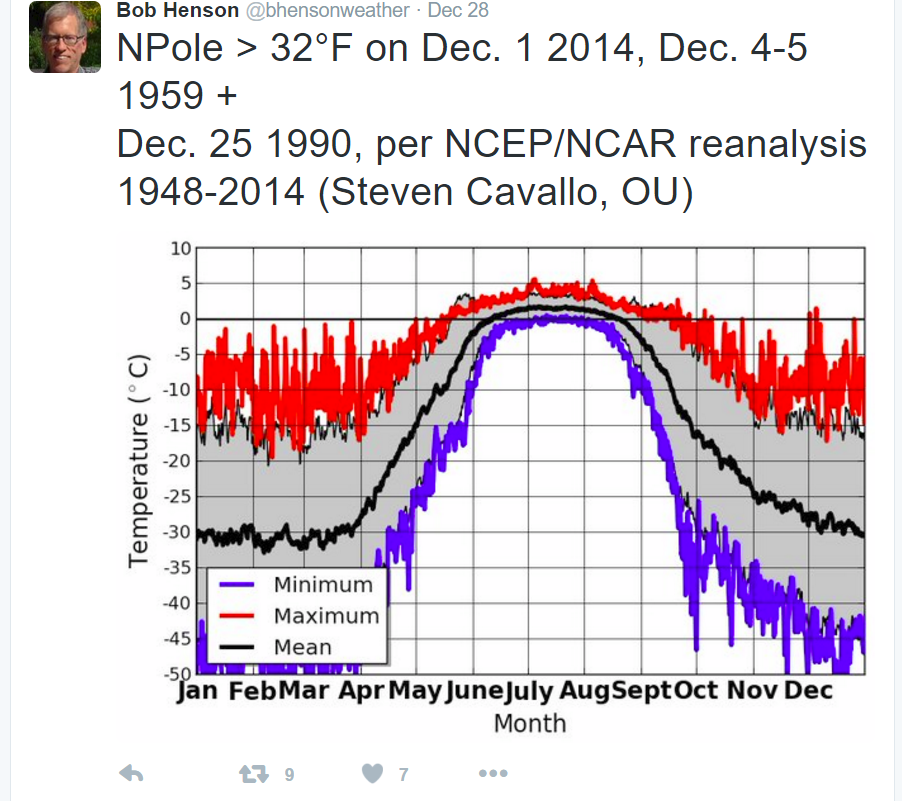 RealClimateScience.com also noted: “A 1964 Arctic Temperature Spike Was Larger Than 2015 – And occurred during era of concern over ‘Global Cooling’ Despite the data, the media is continuing to hype the alleged “unprecedented” weather.

The Washington Post featured Weather Underground’s Jeff Masters explaining: “It’s really hard to scientifically say that’s what’s going on.” Masters added: “This isn’t the climate I grew up with,” he said. “We didn’t see this kind of weather in the 20th century.”

But the data clearly reveals that “extreme weather” has not increased, counter to Masters’ claim. See: PROF. ROGER PIELKE JR: TESTIMONY ON THE CURRENT STATE OF WEATHER EXTREMES: ‘It is misleading, and just plain incorrect, to claim that disasters associated with hurricanes, tornadoes, floods or droughts have increased on climate timescales either in the United States or globally’

Steve Milloy of JunkScience.com, mocked Masters claim: “It wasn’t the weather Jeff Masters grew up with? Well, isn’t weather always different by definition? And then, since he’s so into ‘climate change,’ why would he expect weather to be the same in a climate that is constantly changing? Besides… the Arctic has been this warm before… and sea ice is at a 10-year high.”

Unusual warmth at during the holidays is not unusual. Even in 1940, Santa had to deal with Christmas warmth. See:

Meanwhile, the Washington Post also attempted to link the UK floods to some sort of unprecedented weather. The Washing Post noted: “The U.K. Met office said that December has been a record-breaking month for rainfall in parts of the United Kingdom. A Christmas weekend storm brought up to 8 inches of addition rainfall on saturated soil.”

But the media has failed to note that the current floods in the UK are nothing unusual in the historical record. See: Historic Weather Records Rubbish UK PM Cameron’s Attempts To Blame Floods On ‘Global Warming’

The peer-reviewed literature reveals that linking floods to human caused “global warming” is not possible. See: ‘Yet another study finds little basis for attribution of extreme weather (drought-flood-storm) to human-caused climate change.’

PROF. ROGER PIELKE JR: TESTIMONY ON THE CURRENT STATE OF WEATHER EXTREMES: ‘It is misleading, and just plain incorrect, to claim that disasters associated with hurricanes, tornadoes, floods or droughts have increased on climate timescales either in the United States or globally’ – Link to full testimony of Roger Pielke Jr. to Congress: ‘It is further incorrect to associate the increasing costs of disasters with the emission of greenhouse gases’

• Hurricanes have not increased in the US in frequency, intensity or normalized damage since at least 1900. The same holds for tropical cyclones globally since at least 1970 (when data allows for a global perspective).

• Floods have not increased in the US in frequency or intensity since at least 1950. Flood losses as a percentage of US GDP have dropped by about 75% since 1940.

• Tornadoes have not increased in frequency, intensity or normalized damage since 1950, and there is some evidence to suggest that they have actually declined.

• Drought has “for the most part, become shorter, less frequent, and cover a smaller portion of the U. S. over the last century.” Globally, “there has been little change in drought over the past 60 years.”

• The absolute costs of disasters will increase significantly in coming years due to greater wealth and populations in locations exposed to extremes. Consequent, disasters will continue to be an important focus of policy, irrespective of the exact future course of climate change.’

Prof. Roger Pielke Jr. slams NOAA For Claims of Increasing Extreme Weather: ‘In the US on climate time scales there is no evidence for more hurricanes, floods, tornadoes, drought. Happy to debate this topic with data’ – Pielke Jr. : ‘How can a NOAA spokesdude get away with telling USA Today that droughts are increasing when USGCRP, IPCC and peer reviewed research sez no?’

Facebook
Twitter
WhatsApp
VK
Digg
Previous article2015 Story No. 5: ‘The Phantom Menace Of Global Warming’ – ‘Our leaders doubled down on the invented threat of global warming’
Next articleFlashback 1940: NY Times: ‘Santa Claus ran into some of the strangest weather of his career’ as he flies through ‘all-time high’ temps