UAH v6.0 (University of Alabama Huntsville satellite) data for November were released a couple of days ago.  Here are updated graphs for various regions showing the furthest back one can go to show a zero or negative trend (less than +0.01C/ 100 years) in lower tropospheric temperatures.   For the second month of the climb towards the El Nino peak, there is still NO pause in the Northern Hemisphere trend.  However, in some regions the pause has lengthened.  Note: The satellite record commences in December 1978.  The entire satellite record is now 37 years long- 444 months.

There has been zero trend for exactly half the record, (and for an increase in CO2 concentration of 37 ppm).

The Pause has lengthened again.  For more than half the record the Southern Hemisphere has zero trend.

The pause has shortened significantly. 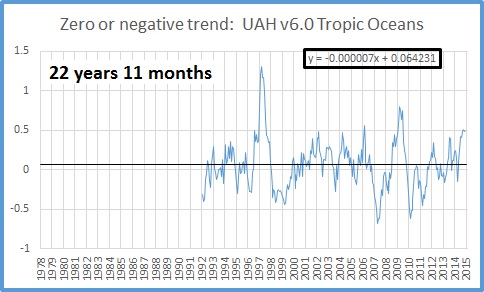 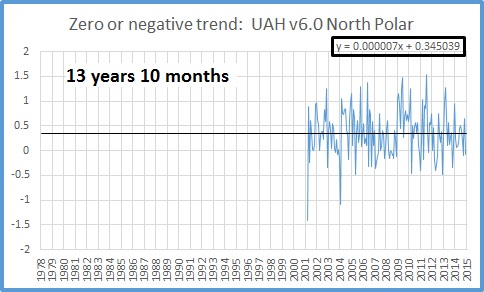 The Pause has lengthened by two months.

At -0.11C/ 100 years, the cooling trend is now undeniable.  For the whole of the satellite record, the South Polar region has had a negative trend.  So much for a fingerprint of warming due to the enhanced greenhouse effect being greater warming at the Poles!