“I would like to see RICO investigations for people on the other side of this,” demanded Climatologist and former NASA scientist Dr. Roy Spencer, at a CATO Institute climate forum in DC today.  Spencer is the leader of a climate research group at the University of Alabama in Huntsville.

“People have been pushing for energy policies for people that we know will kill them. And they know that, and yet they have hidden that information from the public and from politicians for the purposes of advancing an agenda,” Spencer said.

“They should be careful what they ask” Spencer added, warning that the investigations “could be going the other direction in spades.”

Climatologist Dr. Judith Curry, the former Chair of the School of Earth and Atmospheric Sciences at the Georgia Institute of Technology, spoke about the new climate of intolerance.  “I am very concerned by scientists calling to stifle dissent, disagreement,” Curry explained.

“The last three or four months have made it clear to me that I could be spending time in court. If it’s not just for RICO kind of activities but all of these lawsuits,” she said.

“It looks like climate scientists are going to be spending more time in courts. This never occurred to me until three or four months ago,” Curry lamented. Curry also challenged other climate claims and spoker of her evolving scientific views on climate change. “There is so much flouting over mythical 97% consensus…This is stifling debate. I fell into that (consensus trap) and after 2009 with Climategate, I said no more!” Curry explained. “There is enormous pressure for scientists to fall in line behind the consensus,” she added.

Meteorologist Dr. Ryan Maue of WeatherBELL Analytics said: “I have personal experience with two of the RICO 20” professors. Ryan warned that such efforts to silence scientific dissent will have a chilling effect on young scientists.

“The question would be for a graduate student — if you have a professor who is signing petitions calling for a RICO investigation based upon climate science — do you have to wonder if what you’re researching, is this going to be met with the approval of your professor? This is a sort of slippery slope in terms of research.”

“I find it rather appalling,” Maue concluded.

Listen: Warmist Thom Hartmann debates Skeptic: ‘You should be in jail’ for climate ‘denial’ ‘You are killing people.’ Blames skepticism for ‘dead children’ ‘I am calling you a criminal’

‘The Climate Mafia Rewrites Science History’: ‘RICO statute was passed to fight the mafia. Now it’s being used by the climate mafia to silence dissent’ 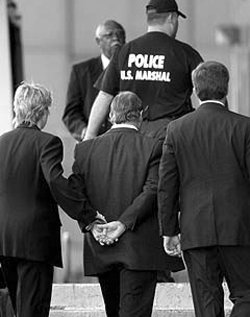 Who’s Behind The Campaign to Bring RICO Charges Against ‘Climate Skeptics?’

Oh-oh! Global warming RICO letter writers may have opened Pandora’s Box – ‘Not only is criminalizing scientific investigation a bad idea, but the underlying contention that skeptics are funded by greedy polluters is false, a myth deliberately spread by the gang that profits from hysteria.’

US Congress To Investigate Climate Scientists Behind RICO Campaign

RicoGate expands: Another warmist scientist who signed letter revealed to get over $600,000 from taxpayers

Those scientists who want to use RICO to prosecute AGW ‘deniers’ have a big problem – ‘The RICO letter’s assertion about extensively documented corruption is revealed to be a literally unsupportable talking point.’

Newsweek Oped: ‘Should Climate Change Deniers Be Prosecuted?’ – ‘It is remarkable how many advocates of this scheme seem to imagine that the First Amendment protects only truthful speech and thus (they think) has no application here because climate skepticism is false. That’s not the way it works.’

Tables turned: Climate profiteer who asked for RICO investigation of skeptics to be investigated by Congress – Chairman Smith: “IGES appears to be almost fully funded by taxpayer money while simultaneously participating in partisan political activity by requesting a RICO investigation of companies and organizations that disagree with the Obama administration on climate change. In fact, IGES has reportedly received $63 million from taxpayers since 2001, comprising over 98 percent of its total revenue during that time.” In light of the non-profit’s decision to remove the controversial letter from its website, Smith directs IGES to preserve “all e-mail, electronic documents, and data created since January 1, 2009, that can be reasonably anticipated to be subject to a request for production by the Committee.”