Three quietest tornado years in a row in the record? 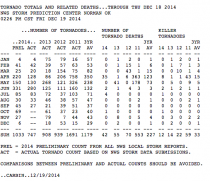 October average is 61 (69 preliminary) and November average is 58 (27 preliminary). Preliminary number for Dec so far is 27 and average is 24.
Although an isolated tornado or two this weekend along the Gulf coast is possible, that essentially appears to be it for theyear.  The 27 prelim count this month is about 10 less for a final count when you remove duplicate reports from 12/23.  Yearly avg is 1253.

Here is a graphic that shows “detrended” tornado counts over the years. This helps to account for the better detection and documentation over time.  Not perfect, but better than just the raw numbers.  Look at 2014…about two standard deviations below average! 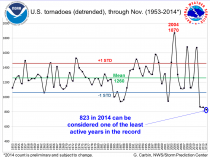 Look at the last 15 years…I see more well below average than well above.  Another way of looking at it, there are more wild swings in the past 15
years.  True, but the door swings both ways and unlike say precipitation (too wet or too dry) the lack of tornadoes is a good extreme regardless of how you look at it.  So with tornadoes, the more wild swing hypothesis due to climate change cancels things out more or less in the long run.  Yes, there will be big years and devastating outbreaks, but that is part of normal climatic variation.  As we have seen, for some reason the very occurrence even a single tornado is somehow “unusual” and makes national headlines routinely, even if it hits nothing or does minor damage with no harm to anyone.

Highlighting such an event only belongs on local news stations near the actual event and TWC/WxNation as a story, and perhaps briefly mentioned in the actual wxcasts on national news at times.

Another item, this is the third year in a row where U.S. tornado fatalities have decreased.  It is not just regression to the mean either due to the very high toll in 2011.  Last three years the numbers have been 70, 55, and 46.  This has more due to with random chance than climate, as we know all it takes is one badly placed intense tornado to make it a well above avg year (i.e. Joplin), but to level the playing field on an argumentative and prevailing public mindset level, a decrease is a decrease, and that is a good thing.  Contrast if it went up 2012-2014, then the klaxons would probably be sounding and this would be utilized as “proof”, even though as I said, this is random chance, either way!  Mesoscale event placement is so far below mean large scale climate it is basically irrelevant to the issue.  Another way of looking at it is that fatalities have resumed the typical in the last 3 years to what has been occurring in most years going back to 1975.

Two main things at work here…
1) watches/warnings for tornadoes has improved considerably in the last 40 years, and
2) the number of people in this country has increased considerably, from about 216 million in 1975 to 316 million in 2014.  So you have one item that decreases the risk of fatalities and one item increasing the risk of fatalities.  You can crunch the numbers all you want here, but overall it at worst appears to be status quo in the long term mean.

One more item, although the number of total tornadoes per year is going up overall (and that is more a better detection/documentation fact than anything), the number of F3/EF3+ has shown a slight decrease in trend.  These are the ones that do the most damage and cause the most fatalities, and what we should be most concerned with.

Bottom line there is reasonable evidence currently that tornadoes in this country both from a meteorological and fatality point of view are not getting
worse.  The U.S. represents only 6.6% of the land on the globe, but is the tornado capital of the world, and has a very extensive tornado database, so looking at tornado trends here is better than anything else we currently have to measure overall activity.

If it wasn't so serious sit would be funny. The post Bloomberg: Wind Turbine Collapses Could Raise Insurance Premiums first appeared on Watts Up With...
Read more

The most important indicator of global prosperity is declining poverty. The post Have Fossil Fuels Progressed Humanity? (Part III) first appeared on Watts Up With...
Read more