UN IPCC draft report claim: “Global warming is already cutting grain production by several percentage points, the report found”
Dr. Easterbrook: “With no global warming in 15-18 years, how can ‘global warming’ cut grain production? Canada’s wheat production is down ~25%, not because of global warming but because of global cooling that has affected the growing season.”
IPCC claim:  “and that could grow much worse if emissions continue unchecked.”
Dr. Easterbrook: “The total increase in atmospheric CO2 during the only period when both CO2 and temp increased (1978-1998) was a whopping 0.004%.  That’s going to cause a lot of warming?”
IPCC claim: ‘Higher seas’
Dr. Easterbrook: “In areas cited as ‘drowning (Maldives, Kiribati, Bangladesh), the sea level in the Maldives has dropped a full meter since 1979; sea level in Kiribati is not rising faster than coral is growing upward; sea level change in Bangladesh is due largely to compaction of delta sediments, and on and on.  In the next 50 years (2064) global sea level rise will be only about 3 inches!” [Climate Depot note: Also see: Latest Peer-Reviewed Studies Demolish Warmists’ Sea Level Rise Scares: ‘Decelerated 44% since 2004′ – ‘Global sea levels have been naturally rising for ~20,000 years and have decelerated over the past 8,000 years, decelerated over the 20th century, decelerated 31% since 2002 and decelerated 44% since 2004 to less than 7 inches per century. There is no evidence of an acceleration of sea level rise, and therefore no evidence of any effect of mankind on sea levels. — Global sea level rise from tide gauges (1.6 mm/year) is half of that claimed from satellites (3.2 mm/year). Which is right? – ‘There is no acceleration of the increase’ – [Climate Depot Note: According to tide gauges, Sea Level is rising LESS than the thickness of one nickel (1.95 mm thick) per year or about the thickness of one penny (1.52 mm thick) a year. According to satellite info it is rising slightly more than two pennies a year (3.04 mm)]
IPCC claim: “devastating heat waves, torrential rain and other climate extremes”
Dr. Easterbrook: “This is simply not true–hurricanes, tornadoes, droughts, etc are all declining, not increasing.”
IPCC claim: “The world may already be nearing a temperature at which the loss of the vast ice sheet covering Greenland would become inevitable, the report said. The actual melting would then take centuries, but it would be unstoppable and could result in a sea level rise of 23 feet, with additional increases from other sources like melting Antarctic ice, potentially flooding the world’s major cities.”
Dr. Easterbrook: “Nonsense! Except for a few small blips, all of the past 10,000 years to 1500 years ago were 2.5 to 5.5 F warmer than present in Greenland and the ice sheet didn’t disappear. As for the Antarctic, the average annual temp is -58 F so warming of 100 F would be required to melt the Antarctic ice sheet.”
IPCC claim: “Human influence has been detected in warming of the atmosphere and the ocean, in changes in the global water cycle, in reduction in snow and ice, and in global mean-sea-level rise; and it is extremely likely to have been the dominant cause of the observed warming since the mid-20th century,”
Dr. Easterbrook: “Global snow and ice is on the increase, not decreasing, the rate of global sea level rise has decreased in recent years, modeling results have not even come close to predicting global temperatures in the past few decades and with no warming in 18 years, how can human influence be invoked?:
IPCC claim: “A continued rapid growth of emissions in coming decades could conceivably lead to a global warming exceeding 8 degrees Fahrenheit, the report found.”
Dr. Easterbrook: “This is based on computer models that have proven to be totally worthless in predicting global temperature for even a few decades, so why should this number have any credibility?”
End Dr. Easterbrook excerpts
#
Other challenges to the new draft UN IPCC report:
We’re running out of food!So says the gullible Justin Gillis of the NYT — completely ignoring all the facts.  Take for instance the current situation  in icy Canada:  “In Western Canada, we’re moving from a huge glut of wheat to still a pretty big carry-over, but by no means the kind of over-supply we had in the last year.  And in 2013: “Canola – Nationally, canola production increased 29.5% from 2012 to a record 18.0 million tonnes; “Wheat: Farmers reported record wheat production of 37.5 million tonnes, a 38.0% increase from 2012.”.  The only crop not a record in 2013 was Barley and Oats.”  Anybody who knows anything about international trade in farm products knows that the chronic problem is surpluses, not shortages
Related Links:
Updated list of 38 ‘excuses’ for the nearly 18 year temperature ‘pause’ or standstill in global warming

‘Every week there’s a new explanation of the hiatus’ 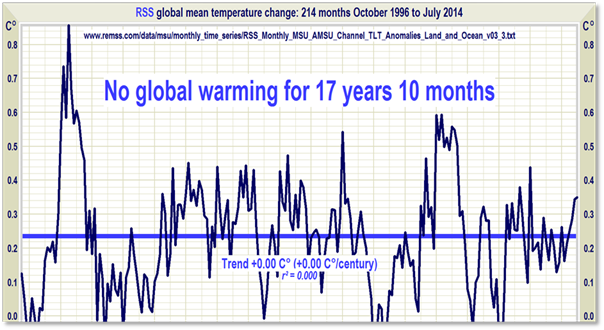 Climate Depot’s Morano on Fox Business with Stuart Varney on August 25, 2014: Morano: ‘If you look at time scales of 50-100 years for (extreme weather). First off, on hurricanes we are at historic record lows, the longest we have gone without a major hurricane strike, category 3 or larger — 9 years now — the period longest since 1900. Big Tornadoes are down. Floods, droughts, all of these factors are either on no trends or declining trends.
And the Washington Post, what they have done is Medieval witchcraft, because they are implying that the EPA regs would have some kind of impact on weather/climate. Even the EPA has hidden these numbers (showing no impact). There would be nothing detectable. EPA regs are pure symbolism when it comes to climate.
So the Washington Post’s solution to global warming is to do government symbolism thatwill have no impact whatsoever on the climate — but it will have huge economic impacts and have centrally planned energy economy from our government.’
Related Link: ‘The number is so small as to be undetectable’ – Pure Symbolism – EPA Climate Regs Avert 0.018°C Temperature Rise – That’s ‘less than two one-hundredths of a degree C’
Facebook
Twitter
WhatsApp
VK
Digg
Previous articleDems use Gore to fundraise on climate
Next article‘The Chinafication of America’: Reaction to Obama Bypassing the Senate with UN Climate Treaty: ‘Obama is taking a page from China’s government’