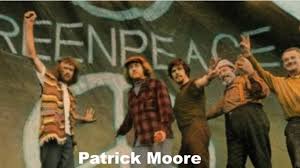 Ecologist Dr. Patrick Moore, co-founder of Greenpeace, warned “I fear a global cooling,” during his keynote address to the Ninth International Conference on Climate Change in Las Vegas on Tuesday. Moore, who left Greenpeace in 1986 because he felt it had become too radical, is the author of “Confessions of a Greenpeace Dropout: The Making of a Sensible Environmentalist.” (Watch climate conference live here)

Moore noted that a cooling would adversely impact agriculture, and said:  “Let’s hope for a little warming as opposed to a little cooling. I would rather it got a little warmer.” (Watch Moore video here at the Heartland Institute event)

“If it warms two degrees, hopefully more in Canada in the North…maybe it would be a good thing if it did,” Moore explained.

Moore noted that carbon dioxide is a trace essential gas in the atmosphere and is not the control knob of the Earth’s climate.

“CO2 is the most important nutrient for all life on earth,” he noted.

“There are so many [climate] variables that we can’t control and when you do an experiment you have to control all the variables except the one you are studying if you want to get a clean result. There are even variables we do not even understand that we cannot control,” he said.

“So it is virtually impossible to think of doing an experiment where we would be able to tweeze out the impact of CO2 versus the hundreds of other variables at work. Which is why you could never make a model that would predict the climate,” he added.

“The President seems to say it is sufficient to say the ‘science is settled’. It is hollow statement with no content,” Moore noted.

He also warned that the education system was failing children when it comes to climate change science.

“Change the way our kids are being taught about this subject because if we don’t there will be a whole generation of people who are just blindly following this climate hysteria,” Moore said.

“Our children are not taught logic, they are not taught what the scientific method is, and they are taught that carbon dioxide is pollution. They are told it is carbon now as if it were soot,” he added.

Other Moore Quotes via New American:

Dr. Patrick Moore, a pioneer environmental activist and co-founder of Greenpeace. Dr. Moore, who led some of Greenpeace’s most famous direct action campaigns against whaling and seal hunts, is the author of Confessions of a Greenpeace Dropout: The Making of a Sensible Environmentalist. Moore told the conference he left Greenpeace when it “went anti-human.” Greenpeace, as well as much of the rest of the radical environmental establishment, he notes, regard humans not as part of the environment, but as enemies of the environment. Greenpeace claims to be for “renewables,” Moore pointed out, “but it is against the two best renewables: hydropower and trees.”

“We should be growing more trees and using more wood,” says Moore, but the global warming alarmists refer to the forests as “carbon stocks” that must not be used. The Greenpeace elites would deny billions of poor people access to energy, Moore notes, while at the same time living lavishly, by comparison. Greenpeace hypocritically boasts of the “super-efficient electric motors” on its new $22 million yacht, says More, but doesn’t mention that the boat is also powered by diesel engines that, of course, use the dreaded “fossil fuels” Greenpeace wants to deny to others.

Greenpeace Co-Founder Tells U.S. Senate: Earth’s Geologic History ‘fundamentally contradicts’ CO2 Climate Fears: ‘We had both higher temps and an ice age at a time when CO2 emissions were 10 times higher than they are today’ (Feb. 25, 2014)

‘There is no scientific proof that human emissions of carbon dioxide (CO2) are the dominant cause of the minor warming of the Earth’s atmosphere over the past 100 years.’ – ‘Today, we live in an unusually cold period in the history of life on earth and there is no reason to believe that a warmer climate would be anything but beneficial for humans and the majority of other species…It is “extremely likely” that a warmer temperature than today’s would be far better than a cooler one.’