Via: The Climate Sceptics Party – http://theclimatescepticsparty.blogspot.com/2014/01/peer-reviewed-magazine-axed-after.html 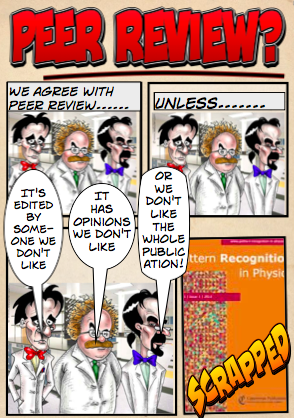 The publisher of a journal apparently favored by climate change skeptics has shuttered it, saying that the editors changed the aim of the title and committed malpractice by using a peer reviewer selection process based on nepotism.

It has been OK for years for the Alarmists to scratch each other’s backs whilst excluding any contrary opinion as the Climategate emails detailed: (link)

One of the most striking revelations to immediately emerge from the “climategate” scandal has been references to efforts by scientists espousing the human-caused warming theory to exclude contrary viewpoints from important scientific publications.

Dating back to 1996, the emails show that both U.S. and U.K. based scientists referred to any research offering alternate viewpoints as “disinformation”,“misinformation” or“crap” that needs to be kept out of the public domain.

The emails include deliberations amongst the scientists regarding efforts to make sure that reports from the UN’s Intergovernmental Panel on Climate Change include their own research and exclude that of dissenting scientists.

In one of the emails, Phil Jones, the director of the East Anglia climate center, suggested to climate scientist Michael Mann of Penn State University We “will keep them out somehow — even if we have to redefine what the peer-review literature is!”

The ClimateGate CRU wanted NZ Scientist removed from an editorial position because he had the temerity to publish a Peer Reviewed Paper which was not in accord with the falsified CAGW hypothesis.

Instead we have discovered that this person has been using his position to promote ‘fringe’ views of various groups with which they are associated around the world.  (link)

Fringe views? Why fringe, if they are Peer reviewed?

The emails will track how annoyance at the publication of a ‘contrary’ article in a journal develops into an attack on the editor, Chris de Freitas, an accomplished scientist. The attack includes a plot to see if they can get him sacked from his job at University of Auckland. Within the story, it is evident exactly what kind of ‘scientists’ the key authors are. The word scientist applied to these people has denigrated the meaning of the word.

Amongst those involved are Phil Jones, Michael Mann, Jim Salinger, Tom Wigley, Barrie Pittock, Mike Hulme + others. In addition Pachauri, the head of the IPCC is copied into many of the emails, meaning that he was fully aware that some of the key scientists in the IPCC were effectively out of control. (link)

We turn to MBH98, the Fraudulent Hockey Stick Paper. This paper was peer pal reviewed and has been so compulsively discredited afterward (phone book numbers create hockey stick). Where is the condemnation of that pal review?

The Papers can be found at this LINK. They include this paper:

Nils-Axel Mörner is a name that has frequently appeared in these pages eg here (The IPCC is wrong) and here (Sea levels not rising.)

Roger Tattersall, known by his online persona “Tallbloke,” is the owner and operater of the blog Tallbloke’s Talkshop, which was set up in November 2009, around the time of the first release of hacked e-mails from the Climatic Research Unit (CRU) at the University of East Anglia.

A conclusion and its implication in the summary paper was: because our scientific investigation leads us to the prediction that the Sun is headed into a protracted minimum, the warming forecast by the IPCC might not happen.

This has led to the journal being axed by the parent Publishing house Copernicus.

Dear Sid-Ali, dear Nils-Axel, We regret to inform you that we decided to terminate the journal
(PRP).

While processing the press release for the special issue “Pattern in solar variability, their planetary origin and terrestrial impacts”, we read through the general conclusions paper published on 16 Dec 2013. We were alarmed by the authors’ second implication stating “This sheds serious doubts on the issue of a continued, even accelerated, warming as claimed by the IPCC project”. Before the journal was launched, we had a long discussion regarding its topics. The aim of the journal was to publish articles about patterns recognized in the full spectrum of physical disciplines. PRP was never meant to be a platform for climate sceptics. In addition to our doubts about the scientific content of PRP, we also received information about potential misconduct during the review process. Copernicus Publications cannot risk losing its excellent reputation in the scientific community. We therefore wish to distance ourselves from the apparent misuse of the originally agreed aims & scope of PRP and decided today to cease the publication. This decision must come as a surprise for you, but under the given circumstances we were forced to react.

We hope that you understand our reasons for this decision. We thank you very much for your cooperation and wish you all the best for your future career. Best regards, Martin and Xenia

Einstein’s E=MC2 was not peer reviewed. It has universal acceptance.

Clearly, Peer review is NOT the best system