STATEMENT TO THE COMMITTEE ON ENVIRONMENT AND PUBLIC WORKS OF THE UNITED STATES SENATE – Hearing on “Review of the President’s Climate Action Plan” -16 January 2014 – Judith A. Curry – Georgia Institute of Technology 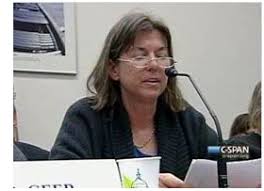 Curry: I am Chair of the School of Earth and Atmospheric Sciences at the Georgia Institute of  Technology. I have devoted 30 years to conducting research on topics including climate of the Arctic, the role of clouds and aerosols in the climate system, and the climate dynamics of extreme weather events.

Curry: ‘The IPCC does not have a convincing or confident explanation for the current hiatus in warming’ – ‘The stagnation in greenhouse warming observed over the past 15+ years demonstrates that CO2 is not a control knob on climate variability on decadal time scales’

Sea Level: ‘Global sea level has been rising for the past several thousand years. The key issue is whether the rate of sea level rise is accelerating owing to anthropogenic global warming. It is seen that the rate of rise during 1930-1950 was comparable to, if not larger than, the value in recent years. Hence the data does not seem to support the IPCC’s conclusion of a substantial contribution from anthropogenic forcings to the global mean sea level rise since the 1970s.’

‘If the recent warming hiatus is caused by natural variability, then this raises the question as to what extent the warming between 1975 and 2000 can also be explained by natural climate variability.’

Heat waves: ‘The EPA also cites evidence that summertime heat waves were frequent and widespread in the 1930s, and these remain the most severe heat waves in the U.S. historical record.’

Extreme Weather: ‘There is a large component of natural variability seen in the 100+ year data record particularly for drought and heat waves, each of which had maximum extremes during the 1930’s. Sea level rise also shows a maxima during the 1930’s to 1940’s’…In the U.S., most types of weather extremes were worse in the 1930’s and even in the 1950’s than in the current climate, while the weather was overall more benign in the 1970’s. This sense that extreme weather events are now more frequent and intense is symptomatic of ‘weather amnesia’ prior to 1970’

Curry’s conclusions: ‘The science of climate change is not settled, and evidence reported by the IPCC AR5 weakens the case for human factors dominating climate change in the 20th and early 21st centuries

With the 15+ year hiatus in global warming, there is growing appreciation for the importance of natural climate variability

The IPCC AR5 and SREX find little evidence that supports an increase in most extreme weather events that can be attributed to humans, and weather extremes in the U.S. were generally worse in the 1930’s and 1950’s than in recent decades.

Not only is more research needed to clarify the sensitivity of climate to carbon dioxide and understand the limitations of climate models, but more research is needed on solar variability, sun-climate connections, natural internal climate variability and the climate dynamics of extreme weather events. Improved understanding of these aspects of climate variability and change is needed to help government officials, communities, and businesses better understand and manage the risks associated with climate change.’

Climatologist Dr. Judith Curry calls for abolishing UN climate panel: ‘We need to put down the UN IPCC as soon as possible’ — ‘As temperatures have declined and climate models have failed to predict this decline, the IPCC has gained confidence in catastrophic warming’ – Judith Curry, Professor and chair of the School of Earth and Atmospheric Sciences at the Georgia Institute of Technology: ‘Given the widespread nature of the infection and intrinsic motivated reasoning.  We need to put down the IPCC as soon as possible’

Forget global warming!? Earth undergoing global COOLING since 2002! Climate Scientist Dr. Judith Curry: ‘Attention in the public debate seems to be moving away from the 15-17 year ‘pause’ to the cooling since 2002’

‘High Priestess of Global Warming’ No More! Former Warmist Judith Curry Admits To Being ‘Duped Into Supporting IPCC’ – ‘If the IPCC is dogma, then count me in as a heretic’