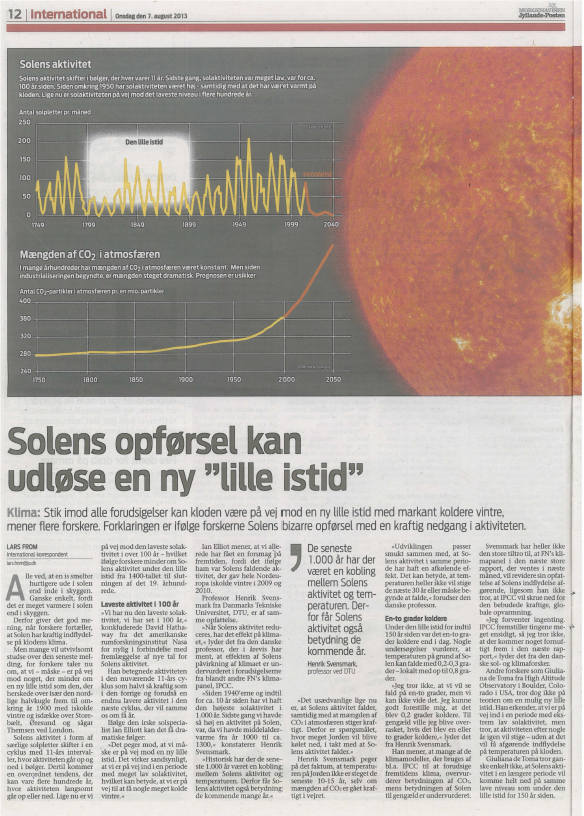 Image right: The August 7 edition of Denmark’s Jyllands-Posten, featured a major 2-page article on the globe’s 15-years of missing warming and the potential solar causes and implications.

Moreover, they are featuring prominent skeptic scientists who are warning of a potential little ice age and dismissing CO2 as a major climate driver. And all of this just before the release of the IPCC’s 5AR, no less!

The August 7 print edition of the Danish Jyllands-Posten, the famous daily that published the “Muhammad caricatures“, features a full 2-page article bearing the headline: ”The behavior of the sun may trigger a new little ice age” followed by the sub-headline: “Defying all predictions, the globe may be on the road towards a new little ice age with much colder winters.”

So now even the once very green Danish media is now spreading the seeds of doubt. So quickly can “settled science” become controversial and hotly disputed. The climate debate is far from over. And when it does end, it looks increasingly as if it’ll end in favor of the skeptics.

The JP writes that “many will be startled” by the news that a little ice age is a real possibility. Indeed, western citizens have been conditioned to think that nothing except warming is possible. Few have prepared for any other possibility.

In its latest 2-page report, the JP now appears to tell its readers that our views on climate science have to be much more open minded and unshackled from the chains of dogmatism.

JP starts by reminding readers that it was just over 100 years ago that the world had clawed itself out of the little ice age, which extended from 1400 – 1900, a time when the Thames river often froze over. All paths in determining the cause of the little ice age all seem to converge to a single factor: solar activity.

‘We now have the lowest solar activity in 100 years,’ David Hathaway from American space research institute NASA newly concluded in connection to the release of new figures for the sun’s activity. He said the activity for the ongoing cycle is half of the previous cycle, and he predicted an even lower activity for the next cycle, which will hit us in few years.”

Suddenly even the greenest of media outlets among us are contemplating what the consequences of a quiet sun may be. The JP then quotes Irish solar specialist Ian Elliott, who says these consequences could be dramatic:

JP then cites at length Danish astrophysicist Henrik Svensmark, who needs no introduction:

Since the 1940s and up to 10 years ago we have had the highest solar activity in 1000 years. The last time we had solar activity that high was when we had the Medieval Warm Period from year 1000 to around 1300. … Historically there has been a close connection between solar activity and temperature for the last 1000 years. Therefore the sun’s activity will also have influence the coming many years. … The unusual thing right now is that sun’s activity is decreasing while there’s a great increase in atmospheric CO2. For that reason the question is how much the earth will cool in a time of decreasing solar activity. … The development is beautifully consistent with a cooling effect of the solar activity in the same period. This could mean that the temperature will not rise for the next 30 years or maybe begin to decrease.”

Where did all the heat go? 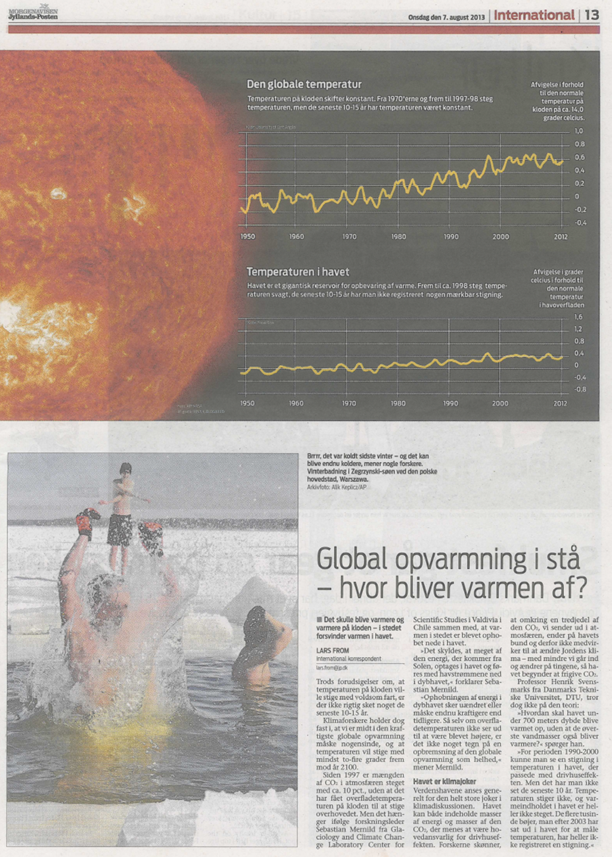 In the second part (see right) of the JP’s feature story on climate science, the daily asks whatever happened to all the missing warming?

JP asks scientist Sebastian Mernild of the Glaciology and Climate Change Laboratory Center for Scientific Studies in Chile, who insists that ocean currents have taken the heat “down to the deep sea”.

Once unthinkable just a few years ago, the European media and JP are now starting to admit the oceans are a poorly understood wild card in the climate equation after all. JP openly states, “The oceans are generally regarded as the big wildcard in the climate discussion.” Jylland Posten ends its 2-page feature story with questions and comments by Svensmark:

How should ocean water under 700 meters be warmed up without a warming in the upper part? … In the period 1990-2000 you could see a rise in the ocean temperatures, which fit with the greenhouse effect. But it hasn’t been seen for the last 10 years. Temperatures don’t rise without the heat content in the sea increasing. Several thousand buoys put into the sea to measure temperature haven’t registered any rise in sea temperatures.”